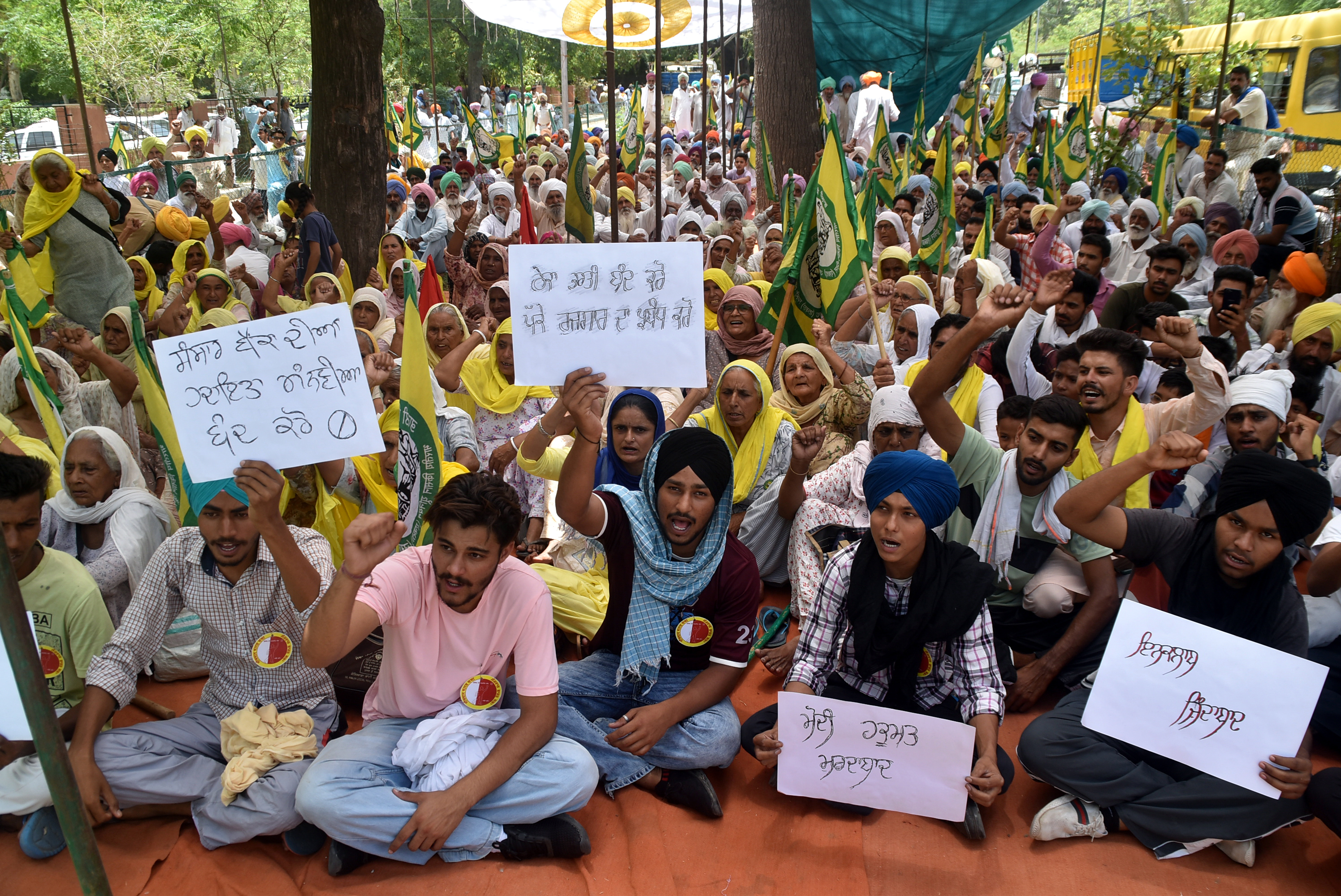 Farm activists raise slogans against the Centre in Bathinda.

On a call given by the Samyukat Kisan Morcha (SKM), scores of farmers under the banner of the Bhartiya Kisan Union (Ekta Ugrahan) staged a protest against the Agnipath scheme on Friday.

They also submitted a memorandum to President via the Deputy Commissioner, demanding revocation of the scheme with immediate effect. Farmers carried out a protest march in the city and raised slogans against the Centre.

Similar protests were witnessed in Mansa district, where farm unions carried out a march. Farmers from BKU (Ekta Sidhupur) and Kul Hind Kisan Sabha also staged separate protests in the city. Farmer leaders , addressing the gathering of protesters, demanded that cases registered on “false grounds” against youngsters protesting against the scheme must be cancelled. There were traffic snarls on busy roads in the city when protesting farmers carried out the march, causing inconvenience to the commuters.

Shingara Singh Mann, president, BKU (Ugrahan) said: “The Agnipath scheme would pave way for more farmer suicides as once in place it will affect the employment of youngsters in armed forces. They would be rendered jobless in four years with no pension which will pave way for drug menace and crime.”

Balkaran Singh Brar, president, Kul Hind Kisan Sabha said: “Once trained, these Agniveers would be used for providing security to big corporate houses. It is a cheaper way to hire them on government expenses so that they can be exploited by corporate houses. Once rendered jobless after getting modern training and putting in four years of service, these youths can be a threat to the nation.”

In Sangrur, farmers owing allegiance to BKU (Ekta Ugrahan) protested against the Agnipath scheme and announced that they would intensify their agitation in coming days if the Centre didn’t roll back the scheme.

“As per the new Agnipath scheme, youngsters would be recruited in the Army only for four years. There would be no pension after retirement. The central government wants to privatise the armed forces,” alleged Joginder Singh Ugrahan, president, BKU (Ekta Ugrahan).

In Muktsar, farmers burnt the effigy of the central government outside the district administrative complex and demanded that the scheme be withdrawn.

In Fatehgarh Sahib, SKM leaders Harnek Singh Bhallamajra and Gurjinder Singh said, “It is surprising that a soldier will retire after four years, but on the other hand, a 90-year-old leader never retires from politics.” — TNS