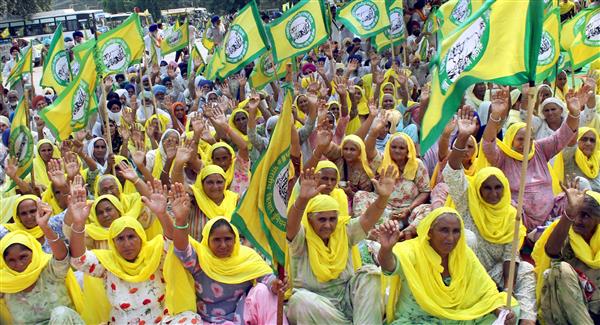 The state’s agitating farmers on Tuesday warned that any Punjab MP who supports the farm Bills in parliament will not be allowed to enter the villages as they blocked roads at many places as part of their state-wide protest.

The protesting farmers squatted on highways and other key roads for two hours at several places across the state against the three Bills calling them “anti-farmer”. Commuters faced inconvenience because of road blockades while the authorities diverted traffic.

The Centre introduced the Bills on food and agriculture reform in the Lok Sabha on Monday. The proposed legislations seek to provide barrier-free trade for farmers’ produce outside notified farm mandis, and empower farmers to enter into farming agreements with private players prior to production for sale of agri-produce.

Intensifying their agitation, the farmers said they were forced to take to streets because of the apathetic attitude of the central government over their demand for the withdrawal of the Bills.

Different farmers’ outfits had given a call for road blocks in Punjab to protest against the bills.

“MPs who support these farm Bills in parliament will not be allowed to enter villages and we will teach him a lesson,” warned Bhartiya Kisan Union (Lakhowal) general secretary Harinder Singh Lakhowal.

Calling the Bills “worse than coronavirus”, he said they would negatively affect farmers, arthiyas (commission agents) and farm labourers, if implemented.

Lakhowal, who was holding an agitation along with other farmers at Neelon bridge in Ludhiana, said they needed the support of each MP as the central government was “hell bent” on bringing the Bills which are against the interest of the farming community.

Lakhowal said his outfit, along with 11 other farmers’ organisations blocked roads, mainly national highways, at 25 places in the state.

“We will go to any extent to force the government to roll back the Bills,” he said, adding that a group of farmers would also hold a protest in Delhi.

Meanwhile, in Moga, a few of the agitating farmers wore black robes while some of them tied a noose around their necks.

Farmers under the banner of BKU (Ekta Ugrahan) held protests in Badal village in Muktsar and in Patiala while in Phagwara, they blocked National Highway 1 for two hours between Phagwara-Hoshiarpur sugar mill crossing and Phagwara-Nakodar road crossing.

As a result, traffic between Jalandhar-Phagwara-Ludhiana, Phagwara-Nakodar and Phagwara-Nawanshahr-Chandigarh was blocked, causing inconvenience to commuters.

Farmers also held a rally at a lock grain market in Phagwara.

Led by BKU (Doaba) president Manjit Singh Rai, farmers raised slogans against the government and demanded the withdrawal of the Bills. The protest was also joined by commission agents and mandi workers.

In Hoshiarpur, farmers under the banner of Kisan Mazdoor Sangharsh Committee staged a protest dharna and blocked vehicular traffic at Bhangla on Jalandhar-Pathankot G T Road.

The Farmers’ Produce Trade And Commerce (Promotion And Facilitation) Bill, The Farmers (Empowerment and Protection) Agreement on Price Assurance and Farm Services Bill and The Essential Commodities (Amendment) Bill were introduced in parliament on Monday.

Farmers have expressed apprehension that these would pave the way for dismantling of the minimum support price (MSP) system and they would be at the “mercy” of big corporates.

The Congress-led government in Punjab described the Bills as a “blatant attack” on the federal structure. On August 28, the Punjab Assembly had passed a resolution, rejecting the farm Bills. — PTI