Farmers also slammed leaders of the SAD for supporting these ordinances 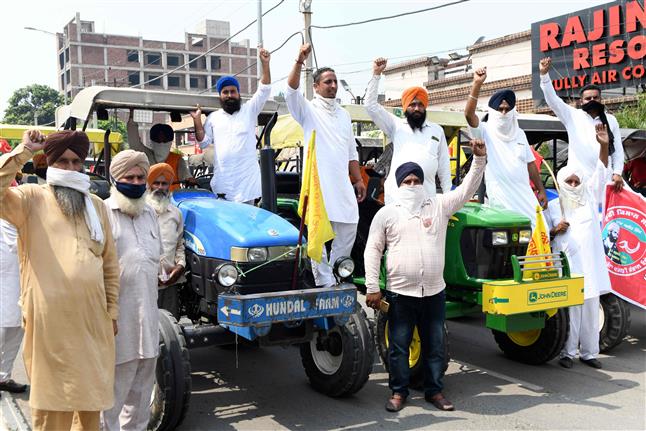 Farmers shout slogans in opposition to the central and state governments during a protest in Amritsar on July 27. AFP

Growers, representing 13 farmers’ outfits in Punjab, held a state-wide protest against three ordinances of the Centre on Monday.

The agitating farmers took out protest marches at several places in the state, including Ludhiana, Moga, Muktsar, Phagwara and Hoshiarpur, to express their anger.

They were protesting against the Farmers’ Produce Trade and Commerce (Promotion and Facilitation) Ordinance, Farmers (Empowerment and Protection) Agreement on Price Assurance and Farm Services Ordinance, and the Essential Commodities (Amendment) Ordinance.

The farmers moved towards the residences or offices of the leaders of the Shiromani Akali Dal and the BJP in their tractors to protest against the ordinances.

Adequate numbers of police personnel were deployed in view of the farmers’ state-wide protest, officials said.

“The Centre is trying to destroy the farming sector with the implementation of these three ordinances,” said a protesting farmer in Muktsar.

Farmers also slammed leaders of the SAD for supporting these ordinances.

The main apprehension of the farming community against these ordinances was the dismantling of the minimum support price system for foodgrain procurement.

In Phagwara, farmers in around 500 tractors moved from the grain market to the residence of Union minister of state for Commerce and Industry Som Parkash.

They put up black flags and “anti-ordinances” banners on tractors.

The protest threw road traffic out of gear on the Hoshiarpur-Phagwara road and later the protesters were stopped by police at some distance from Parkash’s residence.

They held rallies at grain market and on the main road of Urban Estate, a few furlongs away from the residence of the minister.

Manjit Singh Rai, President BKU (Doaba), alleged that these ordinances would pave way for the entry of corporates into agriculture activities, forcing small farmers out of their ancestral profession.

They also alleged that the minimum support price (MSP) of crops would be withdrawn, leaving farmers at the mercy of private players.

Farmers said a countrywide protest will be held against these ordinances on August 9.

In Amritsar, farmers also took out a protest from the Company Bagh area to the residence of BJP MP Shwait Malik.

In Ludhiana, farmers warned of intensifying their agitation if the ordinances were not rolled back.

In Hoshiarpur, activists of farmers’ outfits took out a protest march from Tanda Chowk to Rahimpur grain market.

They also gave memorandum to the Naib Tehsildar at Rahimpur, demanding withdrawal of the ordinances.

At some places, including Moga, farmers reportedly flouted social distancing norms during the protest.

They also rued that rising diesel prices have raised their input cost.

The protests were held despite Chief Minister Amarinder Singh appealing to the farmers to postpone the agitation against the “anti-farmer” ordinances in view of the restrictions in place to check the spread of coronavirus.

On July 20, BKU (Lakhowal) and BKU (Rajewal) and some other outfits had staged protests on similar issues. PTI