In 2019, the state recorded over 8,500 incidents of stubble burning 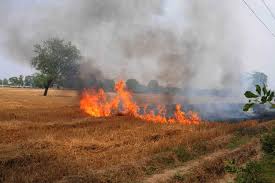 Farmers of Punjab have again resorted to stubble burning after the harvest season. Over 84 incidents of stubble burning were recorded by the Punjab Remote Sensing Centre (PRSC), Ludhiana.

In 2019, the state recorded over 8,500 incidents wherein wheat straw was burnt in fields.

According to experts, the number of such incidents is expected to rise till May end. Farmers’ outfits and the Punjab Pollution Control Board (PPCB) had appealed to farmers to avoid stubble burning amid COVID-19 crisis this year, but it seems this had little effect on farmers, and stubble burning incidents have been on the rise since past four days.

A total of 15 cases of stubble burning were recorded in Bathinda, followed by 10 in Sangrur and nine in Mansa. After every wheat harvesting season, farmers utilise leftover crop in fields for fodder and the rest is burnt.

“Erring farmers, backed by politically inclined farmers’ unions, refused to deposit the fine and even took officials hostage when they were approached in that connection. Investigation in many cases is still pending as farmers’ unions have threatened agitation if their members are harassed,” said an official.

Due to lacking political will, the DCs concerned are yet to expedite steps to recover penalty.

Meanwhile, the Air Quality Index (AQI) is between ‘satisfactory to moderate’ category in Punjab, following the decrease in industrial emissions and also vehicular traffic.

“We are continuously monitoring the situation and also creating awareness. Some stubble burning incidents are reported in some parts,” said member secretary Karunesh Garg.

On Saturday, AQI in Punjab was 98, a little higher from the past few weeks. Amritsar and Jalandhar stood at 110 and 108, respectively, while Khanna noted AQI of 84 and had the cleanest air in Punjab.