Punjab farmers shifting to sustainable ways of getting rid of crop residue : The Tribune India

The state generates around 180 lakh tonnes of paddy straw annually 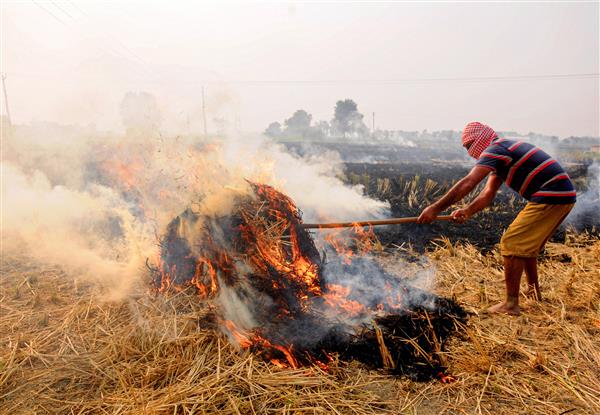 A handful of farmers in Punjab have started disposing crop residue—which is usually burnt and causes air pollution—in a sustainable manner, either by using it as natural fertiliser or selling it for fuel production.

These farmers have not only reduced consumption of fertilisers by mixing crop residue in the soil, but have also begun to monetise the practice by managing the stubble of other growers.

Bhupinder Singh (59), who cultivates 30 acres of land at Badarpur village in Mohali district, has not been burning paddy stubble since 2018. Instead, he mixes it with soil using an MB plough, a tillage equipment.

“After which the land is ready for sowing the next crop — wheat.”

He says that after it is buried, stubble residue gets decomposed within a week.

“With the absorption of stubble in soil, the consumption of fertiliser has dropped. Earlier, we used to use potash for wheat crop which we no longer do,” he says.

“Farmers do not want to burn stubble. When a grower finds his next crop is getting delayed, he resorts to setting crop residue on fire. Otherwise he is as much concerned about the environment as anyone else,” he adds.

“With more and more people becoming aware of the harmful effects of burning paddy, they are managing it instead of setting it on fire,” says Singh who has been awarded for crop residue management at state and national levels.

Growers in Badarpur have set up a farmers’ club from where they dispense crop residue management machinery to farmers.

“We have machines like MB plough, mulcher, happy seeder, zero till drill to give to other farmers in nearby villages on rent. However, we do not charge anything from small farmers for use of these machines,” he says.

Amarjit Singh (48) of village Burj Tehal Dass in Shaheed Bhagat Singh Nagar district has also not been burning paddy for the past 15 years, encouraging others to follow in his footstep.

Considering its ill effects on the environment, Amarjit Singh, who grows crops on more than 100 acres of land, instead sells it to a nearby factory which turns it into fuel. He along with some other farmers give machines like happy seeders, super seeders, ploughs, mulchers etc to prevent them from polluting the environment.

Avtar Singh of village Theri in Mohali, along with three other farmers, is managing paddy with the help of balers - a machine used to compress crop residue into bales.

Almost 500 growers are managing 2,000 tonnes of crop residue with this machine.

The crop residue, which is used as fuel, is then sold to a thread factory in Dera Bassi and an electricity-producing company in Ferozepur, says Avtar Singh.

Earlier, Avtar Singh used to cultivate 75 acres of land. But later he reduced the area under cultivation to 25 acres in order to focus on managing the stubble of other farmers.

Besides buying a rack and tractor trolleys, Avtar Singh has two balers.

“Now we strive to sell crop residue directly to companies dispensing away with agents. It will fetch us more money,” says Avtar Singh.

Paddy straw burning in Punjab and Haryana is one of the reasons behind the alarming spike in air pollution levels in the national capital and adjoining areas in October and November.

As the window for Rabi crop wheat is very short after paddy harvest, farmers set their fields on fire to quickly clear off the crop residue.

Despite taking several measures to check stubble burning over the past several years, the incidents of farm fires continue unabated in Punjab.