The former president of the Akali Dal dies of prolonged illness 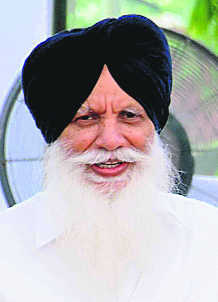 The former Akali Dal chief died of prolonged illness. He was a sitting member of the SGPC. He suffered from pneumonia last year that infected his lungs. He was on medication for the past few months.

He started his political career from the grassroots in the 1960s after becoming sarpanch of his native Didare Wala village, which falls in Nihalsinghwala Assembly segment of Moga district. In 1969, he was elected district president of the Akali Dal in Ferozepur, the biggest district of the state. Faridkot, Muktsar, Fazilka and Moga used to be part of the border district then.

In 1979, he was elected a member of the SGPC and was made senior vice-president and head of the education committee of the religious body. He remained on the post for 17 years. Meanwhile, when Surjit Singh Barnala became chief minister in 1985, he was nominated as chairman of the Punjab Mandi Board.

In 1989, when Barnala was made governor of Tamil Nadu, Tota Singh was entrusted with the party’s command in the state as president for more than two years. He rose to prominence in the party when he instigated an alliance between the leaders of various factions of the Akali Dal- Surjit Singh Barnala, Simranjit Singh Mann and Parkash Singh Badal for strengthening the party.

Even as he was labelled as the right-hand man of Barnala he remained loyal to the Akali Dal despite the Barnala family parting ways from the party twice in the past three decades. When Mann parted ways from the Akali Dal in 1992, Parkash Singh Badal was unanimously elected president of the Akali Dal.

In 1992, the Akali Dal boycotted the assembly elections and Tota Singh was the key man who impressed upon Parkash Singh Badal to boycott the polls because militancy was at its height in those days. In 1997, the Jathedar was elected as MLA for the first time from Moga constituency. He was inducted into the cabinet and became education minister.

In 2002, he was again elected to the state assembly from here. But, in the 2007 elections, he lost the assembly election. In 2012, he shifted his focus to Dharamkot constituency, which was converted into a general seat after the delimitation. Despite a great opposition against him in local party circles, he managed to win the polls.

He was inducted into the cabinet by Parkash Singh Badal and was given the agriculture department. Unfortunately, on May 5, 2012, just weeks after becoming the minister, he resigned from the cabinet after he was sentenced to one-year jail by a special court for misuse of official machinery during his previous tenure as minister.

He filed an appeal in the high court. The court accepted the appeal and stayed his conviction. He was again inducted into the cabinet and given the same portfolio. Tota Singh lost the last two assembly elections (2017 and 2022) but he remained a key figure in the party throughout his political life of almost three decades.