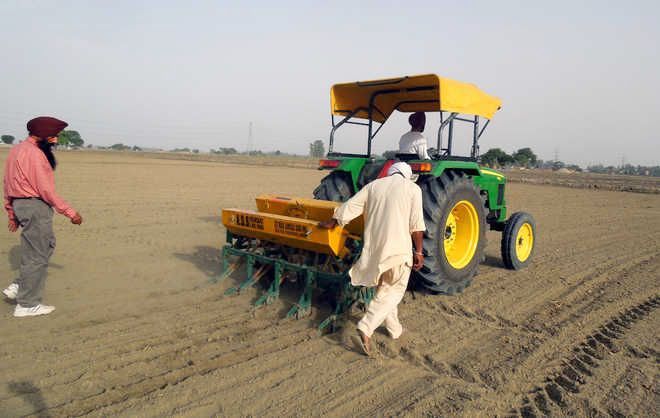 In its efforts to save further depletion of groundwater in Punjab, the AAP government has made it mandatory for those bidding for panchayat land for farming to go only for the direct seeding of rice (DSR) technique. Notably, experts have warned the state is heading towards desertification in another two decades due to excessive water use.

Around 1.70 lakh acre — shamlat and jumla malkan land — is to be auctioned by the Punjab Rural Development and Panchayat Department this year. The auction has already been initiated.

This, however, hasn’t gone down too well with Dalit and poor farmers. Many landless farmers and small peasants who bid for tilling the panchayat land feel the decision puts them at a disadvantage as they won’t be able to afford the machines required for the DSR technique. Though the farmers are enthused with the aid offered by the government for those adopting the technique, they are apprehensive that the panchayat land reserved for auction for the socially disadvantaged groups will be taken by rich farmers. “There may be some relaxations for the land to be given to Dalits in the auction,” a senior officer in the Agriculture Department told The Tribune.

Interestingly, though the amount of water saved on account of the DSR technique is still being estimated, considering that groundwater percolation is different in different cities, the PAU, Ludhiana, which has suggested the technique, says about 20% of the water usage in paddy will be brought down and another 10% that percolates down during puddling of fields will also come down. Around 3,900 litre water is needed for 1-kg rice.

The Agriculture Department has also worked out an estimate of Rs 450 crore, required to pay the aid this year, which has already been okayed by the Finance Department. “The money will be paid from the savings we have from the running of tubewells operated with electric motors, for which the government pays subsidy. We estimate that the amount of subsidy on power for agriculture pumpset consumers will reduce by Rs 900 crore,” said agriculture officer.

Along with the panchayat land, the government is looking at bringing another 28 lakh acres area under paddy by using the DSR technique.

With the promise of Rs 1,500 per acre aid, we are confident that many farmers will adopt the DSR technique. We have enough staff to check all village fields & ensure they follow the technique. Sarvjit Singh, ACS, Development