Except AAP, all parties in Haryana condemn move 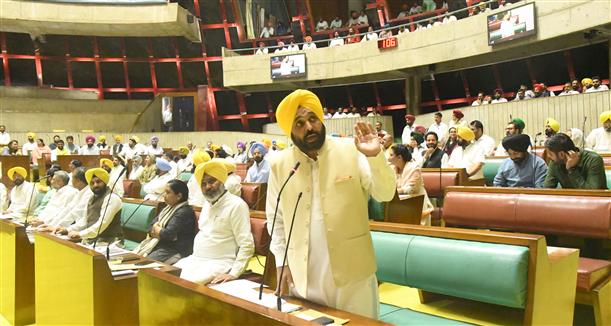 The Punjab Vidhan Sabha, at its special one-day session on Friday, passed a resolution seeking the transfer of Chandigarh to Punjab after the two BJP legislators staged a walkout.

Except AAP, all parties in Haryana condemn move

Chandigarh: The resolution by Punjab’s AAP government staking claim to Chandigarh has united political parties in Haryana as leaders condemned the move. But there was no word from the Haryana unit of AAP. The leaders demanded convening of a special session of the Vidhan Sabha and said the SYL issue should also be taken up afresh. Haryana CM Manohar Lal Khattar said Chandigarh is and will remain the capital of Haryana and Punjab. “Both states have several other issues to talk about apart from Chandigarh,” he added.

I will take up the matter with the President, PM and Home Minister. This is a fight for the rights of Punjab. Let us all fight together for Punjab. — Bhagwant Mann, Chief Minister

The resolution requested the Centre to honour the principles of federalism and not take any step which may disturb the “balance” in the Chandigarh Administration. The resolution comes days after Union Home Minister Amit Shah’s announcement that central service rules would apply to employees of Chandigarh. A notification to this effect was issued two days ago. Till yesterday, Punjab Service Rules were applicable to the employees of the Chandigarh Administration.

The change is being viewed by all parties in Punjab, except the BJP, as an attempt to usurp the state’s right over its capital. The CM, Bhagwant Mann, who moved the resolution, said: “Our job will not end here. I will take up the matter with the President, PM and Home Minister. This is a fight for the rights of Punjab. Let us all fight together for Punjab.” Pointing out that whenever a state was divided, the capital city always remained with the parent state, he said: “Punjab has been seeking the transfer of Chandigarh for the past many years. A number of resolutions have been passed in this regard in the past too.”

Reading out the resolution, Mann said Punjab was reorganised through the Punjab Reorganisation Act, 1966. Since then a balance was maintained in the administration of common assets like the BBMB, by way of giving management positions in certain proportion to nominees of Punjab and Haryana.

“Through many of its recent actions, the Centre has been trying to upset this balance. Recently, the Central Government advertised BBMB member posts for officers of all states and the Central Government, whereas these posts were traditionally filled by officers from Punjab and Haryana. Similarly, the Chandigarh Administration has always been managed by officers of Punjab and Haryana in the ratio of 60:40,” he said. AAP MLA Aman Arora said: “We have the will and intention to fight though the earlier such resolutions yielded no results.”

Partap Singh Bajwa said: “If we don’t object now, it will only embolden the Centre. The next attack will be on Punjab’s riparian rights. We will all have to act together.”

Tript Rajinder Singh Bajwa said the Centre was testing Punjabis, and “we should not fail this test”. BJP MLA Ashwani Sharma opposed the resolution, saying it was aimed at misleading people, even as those on the treasury benches tried to shame him. “This was a demand of UT employees which the Centre has accepted. The central service rules were in force in Chandigarh in 1966-85 and the central pay commission was in force between 1986-1991, ” he said, walking out.