The 32-year-old leader, who is considered a confidant of the Delhi Chief Minister, says the party's chief ministerial face for Punjab will be announced at the right time 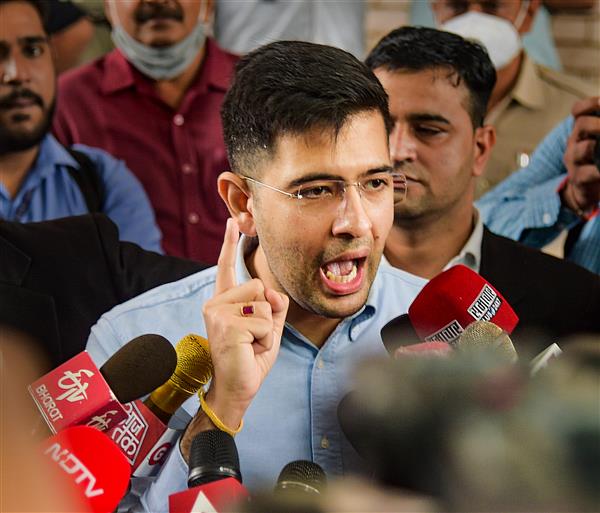 People of Punjab trust Arvind Kejriwal and want the Delhi model of governance to be emulated in the state, AAP leader Raghav Chadha said on Thursday, claiming that his party would form the next government in the state with “outright majority”.

The 32-year-old leader, who is considered a confidant of the Delhi Chief Minister and AAP national convenor, said the party's chief ministerial face for Punjab would be announced at the right time.

Chadha claimed that the people of Punjab were fed up with traditional political parties like the Congress and Akali Dal and wanted to give a chance to the Aam Aadmi Party.

Punjab Assembly polls are due early next year.

“Wherever we go in Punjab, we find that there is a disenchantment of people with all traditional political parties. People hate the Akali Dal and they feel betrayed by the Congress. Everywhere there is a sentiment that one chance be given to the AAP and Arvind Kejriwal. It is all pervasive,” Chadha told PTI in an interview here.

“This time, the AAP will form the government in Punjab with an outright majority. There is a ground sentiment (in favour of AAP). People are fed up with the traditional parties. Above all, people know about our work done in Delhi,” he said.

Chadha said the people of Punjab “love and trust” Kejriwal and want the “tried and tested” Delhi model of governance to be replicated in the state.

“People of Punjab want the Kejriwal model of governance which he has shown in Delhi to be emulated and replicated in Punjab,” added Chadha.

Chadha claimed that the nearly seven years of the AAP government's track record in Delhi would “play heavily on the minds of the Punjabis” and exuded confidence that they would vote for the AAP.

Asked about the delay in the announcement of AAP's chief ministerial face for Punjab, Chadha termed it as “matter of our political strategy”.       However, he called Punjab AAP chief Bhagwant Mann as the “backbone” of the party in the state.

“Bhagwant Mann is our tallest leader in Punjab. He is my elder brother and the glue that binds the AAP in Punjab,” he said.

Several AAP supporters have demanded that Mann be declared the AAP's chief ministerial candidate for Punjab.

The AAP's Punjab affairs co-in-charge further said that Kejriwal had prepared a blueprint for plugging the existing revenue leakages and the state would turn into revenue surplus from revenue deficit with the raising of additional revenue sources without increasing the tax burden.

Replying to a question on Punjab's political parties targeting Kejriwal over his poll promises, Chadha said, “We are making promises which we can fulfil and all these are doable promises.”

During his visits to Punjab, Kejriwal has already promised up to 300 units of free electricity for each household, 24-hour power supply, free treatment and medicines at government hospitals and Rs 1,000 per month for women if his party comes to power in 2022.

“Kejriwal is the principal vote getter for the party and he is the biggest brand for us,” Chadha said while hitting out at rival political opponents for making “hollow promises” to the people.

Targeting Punjab Chief Minister Charanjit Singh Channi, Chadha said he promised sand at Rs 5.50 per cubic foot but it is still being sold at Rs 25 per cubic foot.

Channi promised reduction in power tariff, the AAP legislator from Delhi said while daring the state government to “show a single electricity bill” where power rate has been slashed.

“There is strong anti-incumbency against the Congress. By undertaking cosmetic changes and giving a ride to a few children in a chopper, the Congress cannot be revived,” said Chadha as he attacked the ruling party for “doing nothing” for the people of the state in the last five years.

Attacking the Shiromani Akali Dal, Chadha claimed that people do not “trust” the Badals.

“There is outright hatred against them over issues like corruption, sacrilege and drug menace,” he alleged.

Chadha said that his party would improve the education system in Punjab in case it came to power. PTI