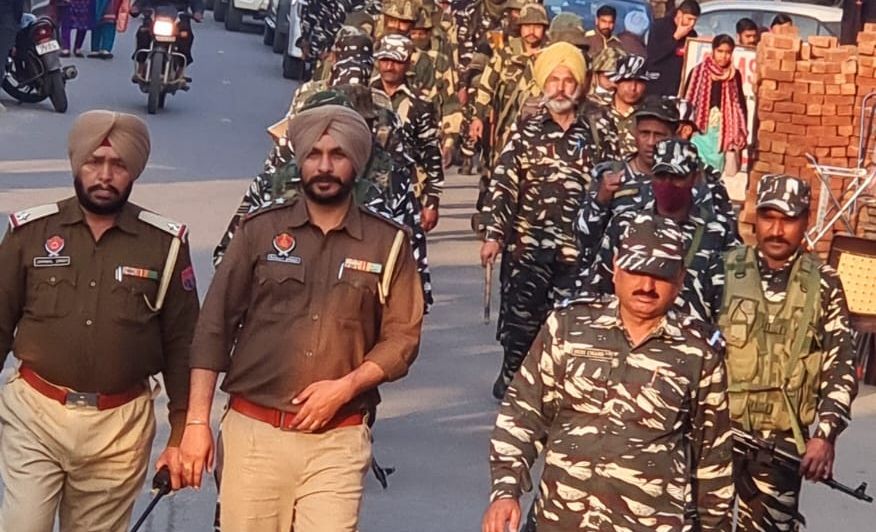 curtains on canvassing: Security forces take out a flag march in Gurdaspur on the last day of campaigning in poll-bound Punjab.

Campaigning for the Punjab Assembly elections ended today amid indications that none of the contesting parties may get a clear majority (59 seats). Anxious candidates held closed-door meetings with their poll managers and party loyalists later in the evening for a feedback on the ground situation.

The main parties in the fray are the Congress, AAP, SAD-BSP, BJP-PLC-SAD (Sanyukt) and Sanyukt Samaj Morcha. The campaigning ended peacefully even though there were moments of anxiety prior to the announcement of elections — lynching of a man after attempted sacrilege at the Golden Temple on December 18 last year and a blast in Ludhiana on December 23. Also, cancellation of PM’s rally on January 5 owing to a security lapse raised questions on the arrangements by the state government.

Putting up a united face, CM Charanjit Singh Channi and Punjab Congress president Navjot Sidhu jointly released a 13-point Congress manifesto here after canvassing in their constituencies. The manifesto promises end to ‘mafia raj’, eight gas cylinders in a year for housewives free of cost, hike in old age pension to Rs 3,100 and free education to the needy.

Most parties concluded campaigning with impressive roadshows. Delhi CM Arvind Kejriwal held one in Akali stronghold Jalalabad where SAD president Sukhbir Singh Badal is in the fray. He attacked the rivals for “confusing the voters by calling him a separatist”. Sukhbir thanked the people for the “massive” response to Shiromani Akali Dal’s social media posts.