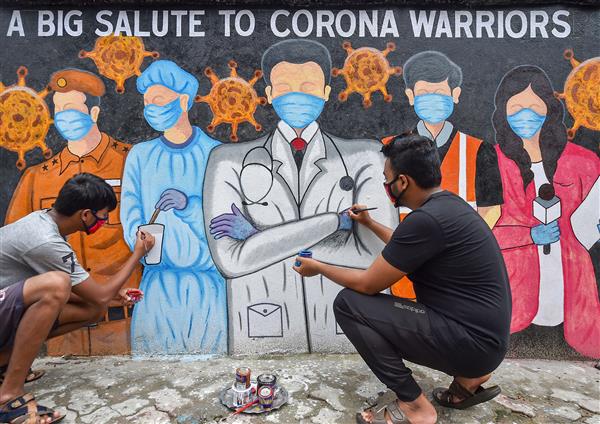 Artists paint a mural on a wall to salute frontline Corona warriors, during Unlock 3.0 in Kolkata, on Tuesday, August 4, 2020. PTI

Punjab has reported the lowest COVID-19 positivity rate of 3.1 per cent in India while the national average currently stands at 8.89 per cent.

Health Secretary Rajesh Bhushan on Tuesday said COVID positivity rate was a major indication of the way a state was addressing the infection.

WHO has recommended that every country and region should conduct 140 tests a day per million population and this level of testing should continue till the time the region attains a COVID positivity rate of less than 10 per cent and ultimately a rate of less than 5 per cent.

“Increased testing has to be seen in context to reduction of the region’s case positivity rate. While the WHO recommends 140 tests a day per million people India’s average is 479 while 28 states have an average of more than 140 tests a day per million. Among the states performing high number of tests, Punjab, Rajasthan, MP and UP have already reached a case positivity rate less than 5 per cent,” Bhushan said today.

Punjab is among states conducting a large number of tests. While India’s tests per million average is 15,119, the data for Punjab is 20,221.

Tests per million in Haryana are 24,914, much higher than the national average.

India today crossed the milestone of conducting more than 2 crore cumulative COVID tests with a record 6.60 lakh tests in 24 hours.

Case fatality rate in the country dropped to 2.10 pc at the lowest level since the first lock down.

Meanwhile, the government also shared mortality analysis today saying 68 per cent of all 38,938 COVID deaths in India as of today have involved men and the rest women.

Age groups below 17 years and 18 to 25 years both make up one per cent each of overall deaths.