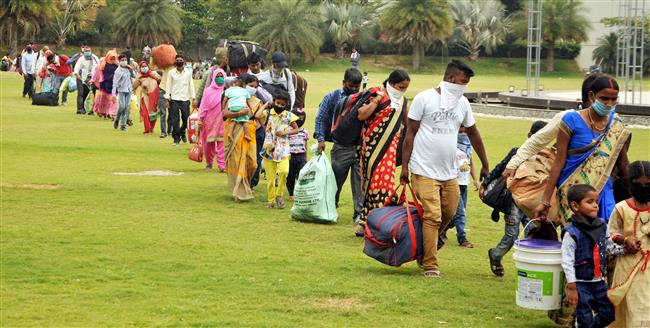 Migrant workers line up to board a bus to Amritsar railway station to take a special train to Bihar to return to their hometowns after the government eased restrictions imposed as a preventive measure against the COVID-19 at a resort on the outskirts of Amritsar on Saturday photo: Vishal Kumar

Punjab recorded 36 new COVID-19 cases and two deaths in a span of 24 hours on Saturday, taking the number of COVID-19 infections in the state to 2,233.

Punjab recorded two more deaths---one each from Ludhiana and Jalandhar.

According to Dr Rajesh Bhaskar, the nodal officer for COVID-19 in the state, both deaths were reported in DMC, Ludhiana. One of the two deaths was a 53-year-old positive from Chowni Mohalla who died on Friday evening.

The patient was admitted to Ludhiana's Deep Hospital three days ago with high fever and Urinary Tract Infection. He was later admitted to Dayanand Medical College and Hospital, where he tested positive.

Seven of Amritsar’s eight cases were contacts of already diagnosed cases and one was a new case.

Four of Pathankot’s cases were contacts of already diagnosed cases and four others were categorised as ILI (influenza-like illness).

In SAS Nagar, two people tested positive. A 29-year-old woman from Sector 71 recently came to the city from Delhi, where she lives with her husband, and tested positive.

The second case was a person who had just returned from abroad.

In addition, a 21-year-old student from Sector 77 also tested positive, although this has yet to be added to the state tally. District authorities are currently trying to find the source of his infection and tracking down his contacts for isolation and testing.

Three of Bathinda’s five cases had travel history. One was a prisoner who tested positive and the last was an anganwadi worker, the state bulletin showed.

A truck driver with no travel history and a vegetable vendor tested positive in Sangrur.

Fazilka’s single infection on Saturday was a self-reported case.

In Tarn Taran, a person who recently returned from abroad tested positive. Fatehgarh Sahib’s case also had its infection source outside Punjab.

Of Hoshiarpur’s two cases, one was a contact of an already diagnosed case and the other had a travel history.

Jalandhar reported three positive cases later on Saturday evening, but this has yet to be added to the state’s official tally.