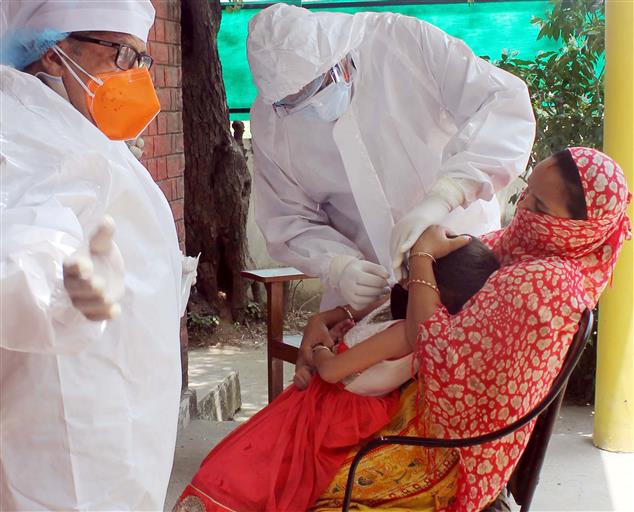 Three districts---Amritsar, Ludhiana and Jalandhar---account for 44 per cent of Punjab’s total cases and 58 per cent of its deaths. Tribune file photo

At 45, Ludhiana also reported the highest number of cases of any district on Tuesday. Jalandhar (26) and Sangrur (22) also continued to report a high number of coronavirus infections.

The three districts, in fact, accounted for 62 per cent of the state’s 150 cases on Tuesday.

Thirty of Ludhiana’s 45 cases were contacts of already diagnosed cases. Six were categorised as influenza-like illness (ILI). Seven of the cases were OPD patients. One was categorised as ANC and the last was a patient with severe acute respiratory infection (SARI).

Jalandhar’s 26 included two were domestic travellers, two contacts of diagnosed cases and four new cases with no contact and no travel history.

The bulletin said that the state was still compiling information for the rest of Jalandhar’s new cases.

Sangrur continues to worryingly report a high number of cases. Five of Sangrur’s 22 cases were new cases with no contact or travel history. Like in Jalandhar’s case, the bulletin said the state was still compiling information for the remaining cases in Sangrur.

Sangrur has been reporting a steady rise in COVID-19 cases since June 21, when the district’s COVID-19 cases stood at 206. The cases have more than doubled since, standing at 490 in the latest bulletin.

However, Sangrur administration reported 18 cases, although it’s unclear if this number is included in the state tally given on Tuesday.

Three districts---Amritsar, Ludhiana and Jalandhar---account for 44 per cent of Punjab’s total cases and 58 per cent of its deaths.

Punjab has reported a significant rise in coronavirus cases in June. The state has more than twice the infections it had at the end of May, while deaths have tripled since, the state’s tally’s show.