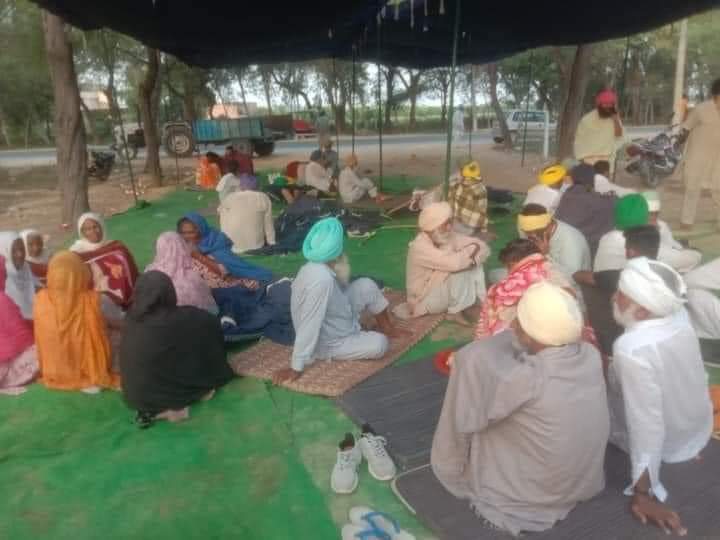 Farmers lodging protest outside sub-tehsil complex at Lambi village in Muktsar district on Tuesday. They have now appealed to farmers and farm labourers across the state to reach here in large numbers. Tribune photo

The Punjab Revenue Officers Association today went on an indefinite strike in the state after a naib-tehsildar, some patwaris and other officials were held captive by farmers belonging to the Bharti Kissan Union (Ekta Ugrahan) at sub-tehsil office in Lambi on Monday.

The farmers had started a protest outside the sub-tehsil complex demanding compensation for the damage of their cotton crop due to pink bollworm attack in the morning, but later barged into the complex and stopped the officials from going out.

Meanwhile, the police lathi-charged the protesting farmers at midnight and dispersed them. Some farmers suffered injuries and were admitted to a hospital.

However, the farmers have again started the protest while revenue officers are gathering at a government rest house at Badal village.

The Muktsar DC Office Employees' Union too, has gone on a strike on Tuesday. The employees from SDM offices in Malout and Gidderbaha are also reaching Muktsar town to join the protest.

Parmod Singla, SDM, Malout said, "A naib-tehsildar, three patwaris and seven other employees were freed in the midnight. We have given an application to register a case against the protesters who held captive the government employees. Two of them were above 50-year-old. We were concerned over their health."