Accounts for 7.7 per cent of Army’s manpower, though its share in national population is 2.3 per cent 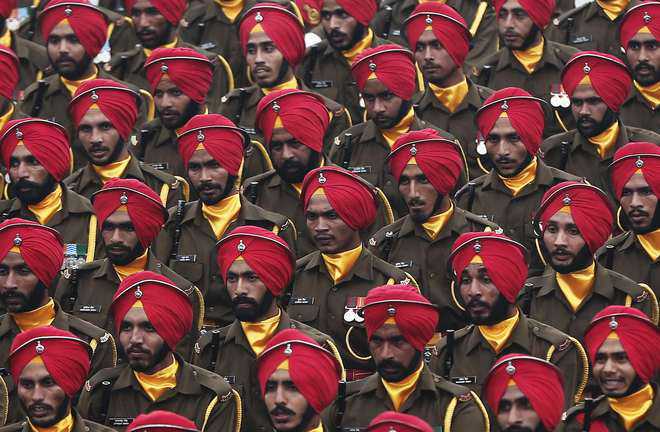 Piping its neighbours, Punjab, often referred to as the sword army of the nation, has the second highest number of soldiers, other than officers, serving in the Army amongst all states and union territories in the country.

The strength of army personnel from Punjab is 89,088, according to information placed by the Ministry of Defence in Parliament today. This accounts for 7.7 per cent of the Army’s rank and file, even though its share of the national population is 2.3 per cent.

With 1,67,557 soldiers, Uttar Pradesh tops the list of states contributing manpower to the Army. While Uttar Pradesh, the nation’s most populous state, makes up 16.5 per cent of the country’s population, its share in the rank and file is 14.5 per cent. Maharashtra, with 87,835 soldiers occupies the third slot followed by Rajasthan, with 79,481 soldiers.

Among other states in the region, Haryana is sixth in the national tally while Jammu and Kashmir and Himachal Pradesh 11th and 12th position, respectively. The contribution of these states to the Army, however, is significantly more than their share of the national population.

Incidentally, the number of doctors presently with the Army Medical Corps and the Army Dental Corps is 6,608, which is higher that the sanctioned strength of 5,736. The posted strength of Military Nursing Officers at present is 3,841 against the authorised number of 4,389.

The region has a strong martial heritage and a rich military history that dates back thousands of years, and is a witness to many wars and battles. Joining the armed forces is a tradition in many families and several generations have donned the uniform.

Vacancies in the rank and file are allotted to the state on the basis of their respective population. In case a state fails to fill up the allotted vacancies, these can then filled from, other states.