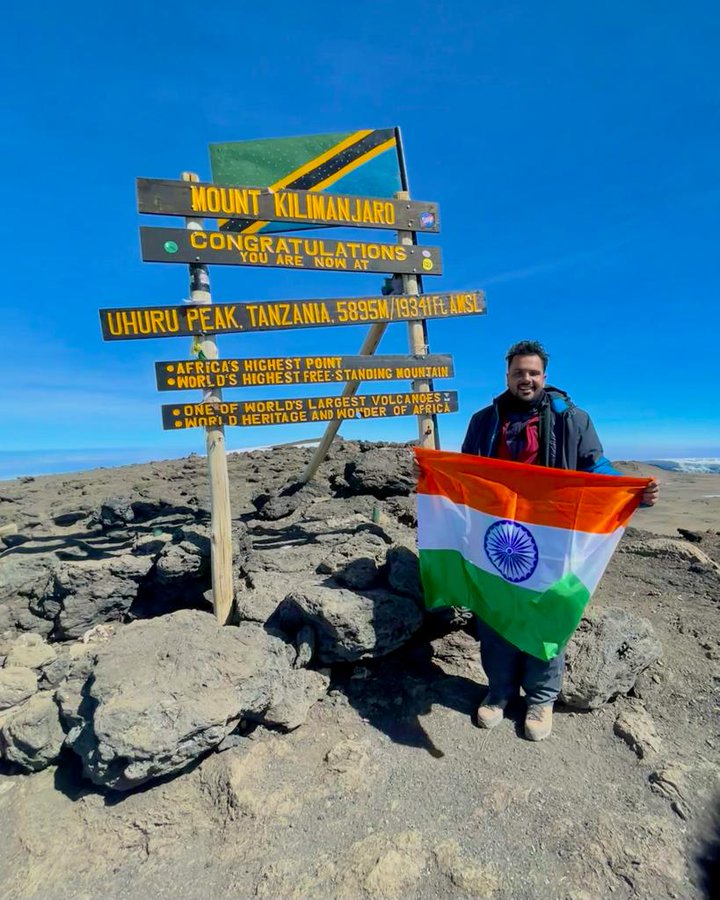 A senior Punjab Police official unfurled India's Tricolour on the top of the world's tallest free standing mountain and the highest mountain of African continent in Tanzania -- Mount Kilimanjaro -- at the height of 5,895 metres, the High Commissioner of India in Tanzania announced on Tuesday.

Superintendent of Police Gurjot Singh Kaler told IANS over phone from Arusha city in Tanzania that he captured the peak on August 15 in his maiden attempt along with two other mountaineers.

His feat coincided with Azadi Ka Amrit Mahotsav, an initiative of the Indian government to celebrate and commemorate 75 years of Independence.

Congratulations @GurjotSKaler on behalf of High Commission of India @IndiainTanzania for the summit & thanks for doing this on #IndependenceDay2022 https://t.co/uvvSUXZVaJ

"The Marangu route I, along with two other mountaineers, opted is quite tough as all other seven routes are. It's also known as Coca Cola route which means that it is a popular amongst the world's leading mountaineers to do the summit. The chances of summit are higher on this route," Kaler said.

Earlier, Kaler had done the summit of Mount Hurro of Machhadhar range in the Himalayas.

The police official said the Gilman point was the toughest to traverse because of the rough terrain of rocks and adverse weather.

"We started the expedition from Marangu Gate to Mandala Hut and then from Mandala Hut to Horombo Hut to Kibo Hut. From Kibo Hut to Gilman Point was the toughest part. Then Stella point and finally Uhuru Peak, the top point of Mount Kilimanjaro at 5,895 meters, he said.

"Of course, the weather did pose a huge challenge, especially when we started to climb from Kibo Hut to Gilman point." The ascent started at around midnight at 12 a.m. amidst chilly and windy weather and took three days to conquer the peak.

The top point of the peak, Uhuru Peak, in Swahili means freedom.

Tanzania got freedom from colonial British in December 1961 and this peak is named Uhuru, freedom.

Kaler, who is penning poems, songs and books to create social awakening, besides equipping people with the skills to become the cyber defenders, had also done a skydive from 15,000 feet at Nottingham in Britain to honour the Corona warriors in 2020.

Dedicating the achievement to the spirit of combating climate change and global warming, an elated young officer Kaler said the mission was to inspire the youth to fight against drugs and promotion of sports culture.

He said his aim was not to just unfurl the Tricolour but his personal glory.

"The mountains teach us how to respect mother nature and inculcate the qualities of patience, empathy and respect for nature. The aim of the mission was to spread awareness about the issues of global warming and climate change.

"The goal is to inspire the youth to overcome addiction to drugs and promote sports culture." For Kaler, the journey is always more important than the destination.

"We have no planet B. Only earth. We need to respect nature and behave as responsible inhabitants of planet earth," he added.

Currently, Kaler, who has previously worked with the Federal Bureau of Investigation and the Royal Canadian Mounted Police, is working as Joint Director (Vigilance), Punjab Police.

High Commissioner of India in Tanzania, Binaya Pradhan, officially tweeted about his achievement and congratulated him for bringing glory to the nation.

"Congratulations @GurjotSKaler on behalf of High Commission of India @IndiainTanzania for the summit & thanks for doing this on #IndependenceDay2022," he tweeted.