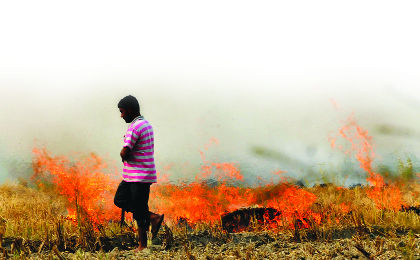 Despite the Supreme Court asking Punjab to penalise those defying the ban on farm fires, the state government has failed to collect fine from the erring farmers, who were booked immediately after the court orders. Against the Rs 6.10 crore penalty to be realised, merely Rs 1 lakh has been collected to date.

The whole exercise of levying fines and registering FIRs has turned out to be an eyewash as farmers haven’t been approached by the state machinery to deposit the fine.

Last year in October and November, the Supreme Court had intervened when the air quality of Delhi and parts of Punjab and Haryana took a dip due to the farm fires.

Prohibiting stubble burning, the court had asked the governments to penalise the violators. Following the court orders, 1,737 FIRs were registered in haste.

According to data collected by The Tribune, over 52,000 farm fires were reported in Punjab after the paddy harvest season. In over 23,000 cases, environmental compensation was imposed on farmers and red entries were made in their land records.

Rs 6.10-crore fine was imposed on erring farmers. However, just Rs 1 lakh has been deposited till now.

The data shows that Sangrur tops the chart Rs 1.17-crore penalty slapped on farmers in 6,666 cases. Patiala comes next with 3,997 farm fire cases and a fine of Rs 85.65 lakh imposed on violators.

A senior government official confirmed that they had no directions from the government to collect the fine or act against the erring farmers.