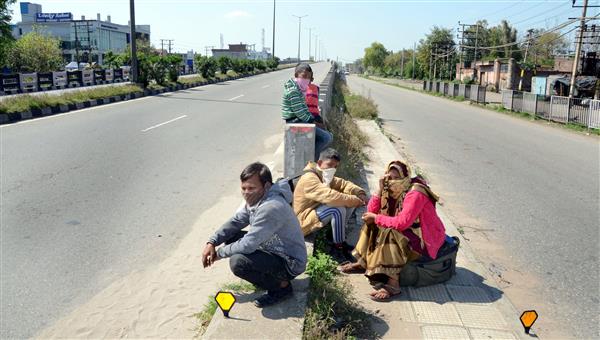 Migrants labourers looking for transportation to reach their native villages in MP are stranded on Jalandhar- Delhi Highway in Jalandhar on March 29, 2020. Tribune file photo

Punjab Education Minister Vijay Inder Singla on Monday said school buildings would be turned into temporary shelters to house migrant labourers left stranded by a lockdown to halt the spread of coronavirus.

As the country faces an unprecedented exodus of migrants fleeing back after losing their livelihood to the countrywide lockdown, Singla said he had asked his officials to direct district education officers to provide food and shelter at these schools for migrants to stay.

Singla also announced that he was also postponing examinations of Class 8, 10 and 12 of the Punjab School Education Board that were scheduled to begin on April 1.  Some theory papers of Class 10 scheduled from April 3 have also been put off.

New schedules will be uploaded after the situation returns to normal.

Coronavirus cases in the country have risen alarmingly to over 1,000, with 27 deaths. Punjab has reported two deaths from 39 infections so far.

The health crisis has prompted the central government to announce a 21-day lockdown. Experts say this is an attempt to “flatten the curve” of the virus. Punjab meanwhile has imposed a curfew with the same aim.

The curfews and lockdowns have sparked another crisis---that of migrant exodus. Desperate migrants have been pouring on to the streets in several parts of the country in an effort to walk back home---a situation that health experts and government officials fear could spread the virus.

Besides, reports say that over 20 migrants have died in various parts of the country while walking back several kilometres to their states.

The migrant exodus has central and the state governments tighten curbs on movement in an attempt to stop the spread of the virus---the central government recently wrote to states asking them to seal their borders.

Give them transportation, says Manish Tewari

Member of Parliament from Anandpur Sahib Manish Tewari has written a letter to Prime Minister Narender Modi asking him to provide transportation to take desperate migrants back home.

In this letter, the MP has written that this medical emergency may fast morph into a humanitarian crisis.

“Hence it’s a request to not stop them at the borders but to run some targeted railway specials which may help them to reach their homes,” the letter says.

“Once they reach their hometown, they may be screened or may even be quarantined there,” he said. “This issue is not concerning Delhi alone but the country on the whole. Hence there is a need to think more deeply on this situation,” the letter said.