Highest per capita availability in country at 1,181 gm per day 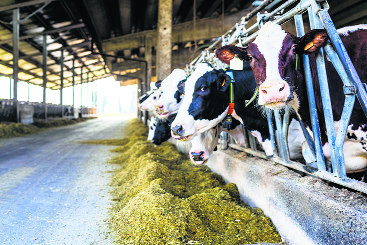 The average milk yield in Punjab increased by 50.14 per cent between years 2012 and 2019, as per the figures of the livestock census 2019, Department of Animal Husbandry. The state now has the highest per capita milk availability in the country at 1,181 gm per day against the national average of 394 gm.

While the number of buffaloes fell from 51 lakh to about 40 lakh between 2012-2019, that of cows increased from 24.27 lakh to 25.18 lakh during the same period. On the increased milk production, the Director, Mission Tandrust, KS Pannu, says: “The main reason has been the emergence of high-tech commercial dairy farming in the past decade.” The state has more than 10,000 high-tech dairy farms under the umbrella of Punjab Progressive Dairy Farmers Association.

Vice Chancellor of Guru Angad Dev Veterinary and Animal Sciences University Dr Amarjit Singh Nanda says healthy diet and upgraded medical care has vastly contributed to the rise in milk production. “The sperm used for reproduction is very healthy. Preserved green fodder (silage) is given to animals for three-four months after the weather turns dry. The buffalo count has slipped as unfit and non-milk producing heads are taken for culling”, he explained.

Milkfed MD Kamaldeep Singh Sangha says milk yield has gone up primarily because of high-quality germplasm used in reproduction of Holstein Friesians cows. Raising concern over milk availability, Shiromani Akali Dal (SAD) MLA Harinder Pal Singh Chandumajra had while addressing the Assembly last week noted: “In the wake of the reduced number of milk cattle, the state is flooded with spurious milk and milk products. The government needs to hold a probe.”