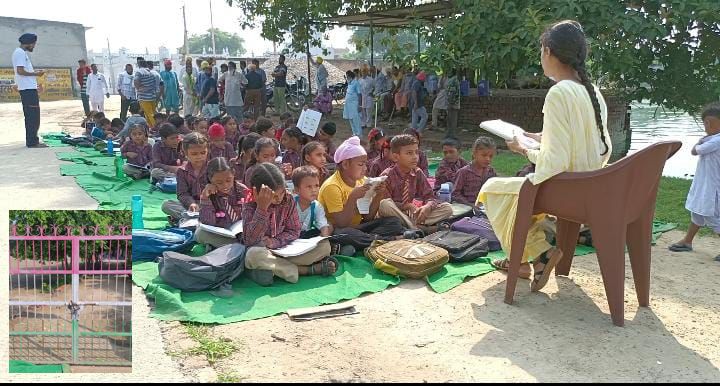 Students attend a class on a roadside in Sangrur's Lehal Khurd village as residents kept the gate of Government Primary School locked on Tuesday too.

As residents of Lehal Khurd village kept the local Government Primary School locked for the second consecutive day today, students attended classes on a roadside and later at a local gurdwara.

The residents are protesting the acute shortage of teachers and are demanding the posting of the required staff for 200 students in the school. They also announced that they would be blocking the Lehra-Moonak road tomorrow.

“Since the government isn’t serious about filling the vacant posts of teacher in the school, we have decided to block the Lehra-Moonak road tomorrow. No classes will be allowed inside or outside the school till the staff is provided,” said Jagdeep Singh, BKU Ugrahan leader.

Today, the villagers did not allow the teachers to take classes outside the school. So, some educated youngsters first taught the students on a roadside and later due to the hot weather, they were shifted to the village gurdwara.

“Despite our repeated requests, the government has failed to provide the required staff to our village school. The shortage of teachers has badly affected the studies of students,” said Harsewak Singh, a villager.

DEO Kultaran Singh said they were trying to convince the villagers to end the stir. “We have written to the higher-ups and a teacher is likely to be posted here soon. In the meantime, the villagers should allow the present staff to conduct the classes.”