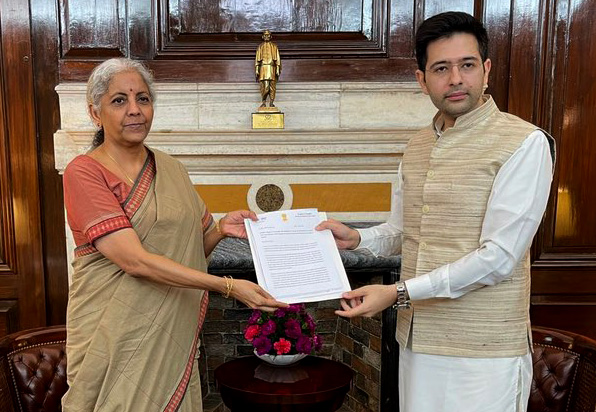 Aam Aadmi Party (AAP) leader and Rajya Sabha MP Raghav Chadha on Thursday met Union Finance Minister Nirmala Sitharaman and drew her attention towards several issues of Punjab, chief among those being the imposition of 12 per cent GST imposition on ‘serais’ (inns) in the area around the Golden Temple complex.

Addressing a press conference, MP Chadha said that he has submitted a memorandum to the Union Minister demanding immediate rollback of the GST on ‘serais’ and Sitharaman has assured him that all demands would be considered seriously.

Chadha said that he also sought a special financial package and additional water resources for the welfare of the farmers of Punjab and also to address the issue of depleting water crisis. This is a matter which needs urgent attention if Punjab and its farmers are to be saved, he added.

In his memorandum to the Finance Minister, the AAP MP said that the Centre’s recent decision to impose 12 per cent GST on ‘serais’ has caused great anguish to the followers of the Sikh religion.

‘Serais’ for pilgrims are far from the concept of a hotel and the decision to impose 12 per cent GST on their activities amounts to unnecessary financial burden on the Sangat (faithful). It should be immediately rolled back, the MP said.

Raising the crucial issue of drastic fall in groundwater in Punjab, Chadha demanded an immediate financial package and said that the Union Government should grant additional water resources to the state.

“The cultivation of paddy has resulted in an alarming fall in groundwater that has now reached a dangerous level,” Chadha said.

Punjab led the Green Revolution and took the initiative to grow paddy which was not a part of our staple diet. The cultivation of paddy has resulted in an alarming fall in groundwater that has now reached a dangerous level and needs urgent intervention. — Raghav Chadha, Rajya Sabha MP