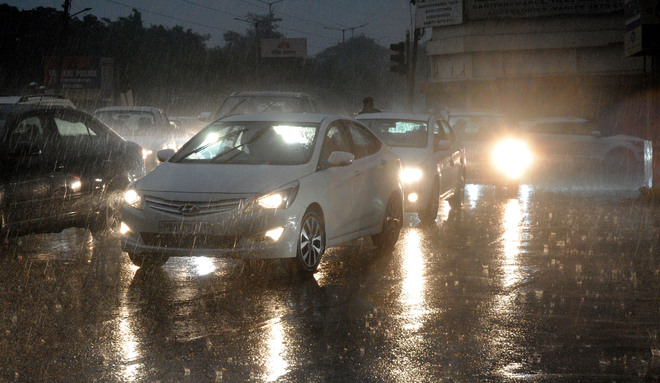 Commuters drive amid rain in Jalandhar on Sunday. Tribune photo

Light rains and thundershowers at most places in the state on Sunday brought cheer to farmers, especially wheat growers who had sown their crop without burning paddy straw. It is also beneficial for those who are preparing to sow wheat and other rabi crops.

Muktsar: The rain brought a relief from air pollution in the district. Stubble burning incidents and bursting of crackers on Saturday night had increased the air pollution. TNS

Moreover, air pollution levels are also likely to fall after the state witnessed thousands of incidents of burning the paddy straw during the current harvesting season.

Dr Brar said farmers who had already sown wheat crop a few weeks ago without burning the paddy straw was likely to benefit a lot.

Dr Balwinder Singh, Chief Agriculture Officer, Moga, said, “The rain will not only help in reducing the pressure on the groundwater but also help in retaining soil moisture. It will help reduce the cost inputs. Even where farmers are going for late wheat sowing, the rain will be of immense help to them.”

Bathinda: Rain lashed parts of Bathinda and Mansa districts on Sunday. As per Meteorology Department officials, rain was of mild to moderate degree that lasted for about 20 to 25 minutes in some parts of the region.

Meanwhile, residents in Bathinda rued that even mild rain that lasted for half an hour resulted in accumulation of rainwater on city roads. They however, got much needed relief from the air pollution caused by burning of paddy stubble lately. — TNS