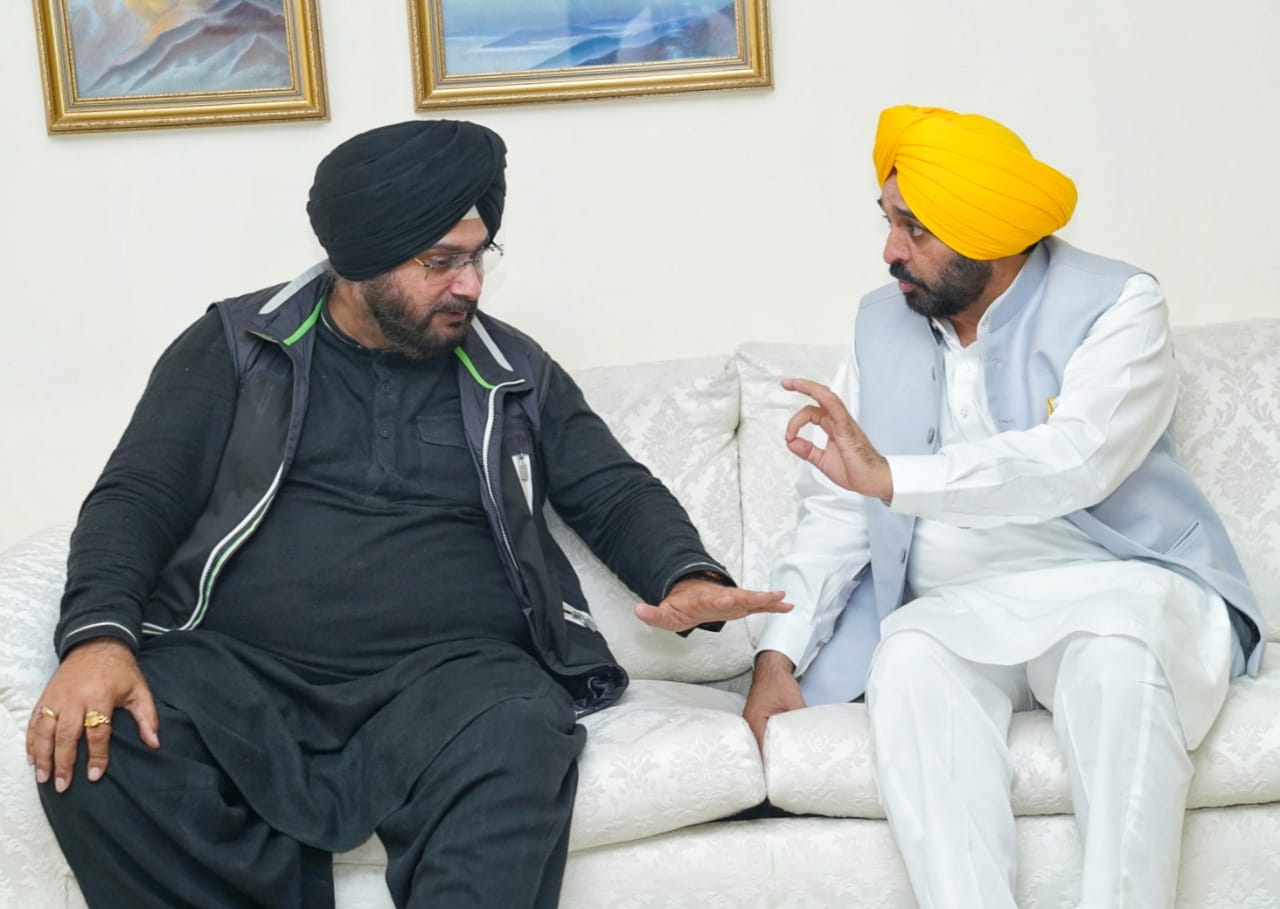 A meeting between Chief Minister Bhagwant Mann and former PCC chief Navjot Sidhu, held this evening, was projected by the latter as “a new milestone in Punjab’s polity, where the ruling party and Opposition leaders can work together to rebuild the state”.

Mann hasn’t changed at all after becoming the CM. He was humble and listened to my suggestions for increasing state income. Navjot Singh Sidhu, PCC Ex-chief

CM agreed to meet Sidhu, who is not even a minister, MLA or an MP. Just see the difference… they would not give time to an AAP leader. Laljit Singh Bhullar, Transport Minister

Though there was no official word from Mann, his office, or the AAP about what transpired, party sources said not much should be read into the meeting of the CM with an “ordinary man, who wanted to give some suggestions for taking Punjab on a path of growth and development. He is neither the CLP leader nor the state party chief, but he sought a meeting with the CM, who agreed”. There was a lot of buzz about the intent behind the meeting.

Sidhu, however, was “floored by Mann’s humility and gave him suggestions on increasing Punjab’s income to carry out development projects”. This meeting gave an opportunity to Sidhu to hit out at his detractors in the Congress.

While the meeting lasted 50 minutes, the optics seemed contrary to the claims made by Sidhu’s aides. Ahead of the scheduled meeting, held at the office of CM Mann in the Punjab Civil Secretariat, Transport Minister Laljit Bhullar ridiculed Sidhu, saying: “Our CM is so large-hearted, he even agreed to meet Sidhu, who is a ‘haarya hoya, nakaarya hoya aam aadmi’ (defeated and rejected common man), who is not even a minister, MLA or an MP. Just see the difference… during the Congress and before them Akali rule, they would not give time to any AAP leader.”

Bhullar went on to say Sidhu didn’t know what he had to speak or do. “His party colleagues have come up with vague statements — some say he sought time from the CM, others say Mann called him and still others say Sidhu approached the Governor, who in turn forwarded his letter to the CM and suggested a meeting between the two. They should at least be consistent when they talk,” he said.

This as well as the “off-the-record” statements by several party leaders have ruled out any entry for Sidhu into the AAP, considering the complaints seeking disciplinary action against him in the Congress.

Unfazed by AAP leaders’ statements, Sidhu sang praise for the CM after the meeting. “Mann was humble and listened to my suggestions for increasing Punjab’s income through plugging leakages in excise duty collections, increasing VAT collections on retail fuels and tax collections through nipping the sand mafia. I used to give the same suggestions to my party’s government, but to little avail.

“I urged the CM to stop the ‘thekedari’ system as the political class hid behind these contractors. Fix the rate of sand, ensure there is no liquor smuggling from distilleries, get the land under encroachment vacated and cancel the faulty PPAs — this is what I suggested to Mann. If he does this, which he can because of the huge mandate in his favour, he will be remembered in the history as a man who rebuilt Punjab. I will only act as a ‘pehredar’ (watchdog),” he said after the meeting.

Interestingly, Sidhu again hit out at the Congress and his party colleagues, saying a minister who he wanted to act against those encroaching on government land had himself encroached upon property.