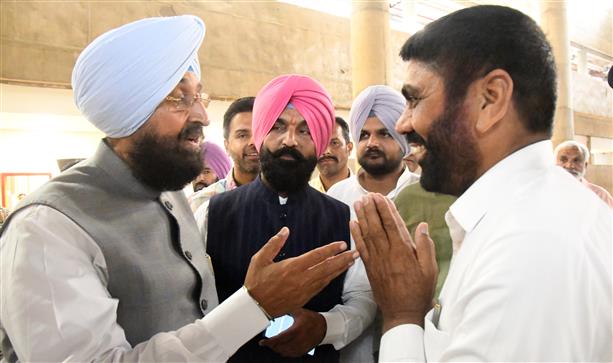 Congress MLA Partap Singh Bajwa interacts with an AAP MLA after the first session of the Vidhan Sabha. Tribune Photo

Ahead of announcement of the Congress Legislature Party (CLP) leader in the Punjab Vidhan Sabha, senior party MLAs were seen preparing themselves for the crucial role of the Leader of Opposition (LoP) on the day when all elected legislators were administered oath by the pro tem speaker on Thursday.

Barring Rana Gurjeet Singh, who has been re-elected from Kapurthala, all other party MLAs were administered the oath.

The meeting to elect the CLP leader is expected to be held on Saturday or Sunday after AICC general secretary Ajay Maken reaches Chandigarh to suggest organisational changes. Sources said Majha leaders were rallying behind Sukhjinder Randhawa for the post. On the other hand, Partap Bajwa, owing to his seniority, is also the front-runner for the post.

After the oath-taking ceremony, Bajwa, who has been elected from Qadian, reminded AAP leader Avind Kejriwal to “run the Vidhan Sabha for at least 100 days in a year” so that serious legislative business could be discussed for betterment of Punjab. “Kejriwal had stated that the Vidhan Sabha sessions in Punjab are run for seven or eight days. Now, he can change the practice,” said Bajwa. He said the Congress would play a constructive role as Opposition while reminding the government of its promises.

“The first job of CM Bhagwant Mann should be to address concerns of the employees and pensioners. Then fulfil its promises of giving Rs 1,000 per month to women above 18 years of age,” he said. “The total burden of sops would touch Rs 43,000 crore. Let’s see how the AAP brings back the state’s economy on track,” said Bajwa.