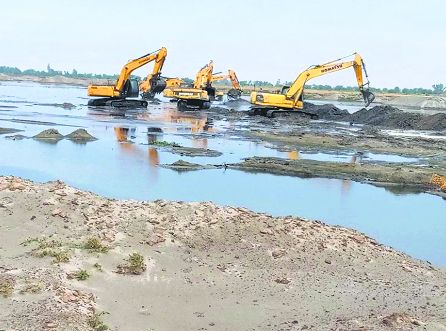 In 2019, when the Sutlej breached villages in Shahkot, the issues of broken, weak bundhs and illegal mining took centre stage. Two years later, farmers in the affected villages say little has happened to protect them, though they acknowledge many development works have taken place.

After delimitation in 2008, the seat was won by SAD leader Ajit Singh Kohar in 2012 and 2017. After his demise, the Congress wrested the seat back in the 2018 bypolls. Kohar’s son Naib Singh lost to Congress’ Hardev Singh Ladi Sherowalia.

However, a plethora of problems, including illegal sand mining, false cases and weak bundhs — continue to plague the constituency. Illegal mining is rampant in Baghela, Chak Bahmania, Rame and Pipli Miani among other villages. Another key grouse almost all residents complain about is the registration of false cases.

A resident of the Dhandowal village, which is 3 km from the Sutlej, says: “Those peddling drugs aren’t booked, but false cases are lodged against the poor. River banks are also ravaged. No lessons have been learnt from the 2019 floods. Most of the Dhussi bundhs are weak and pose threats.” Villagers credit environmentalist Balbir Singh Seechewal for making efforts to strengthen bundhs. They rue the government hasn’t done anything to stop mining or strengthen the bundhs.