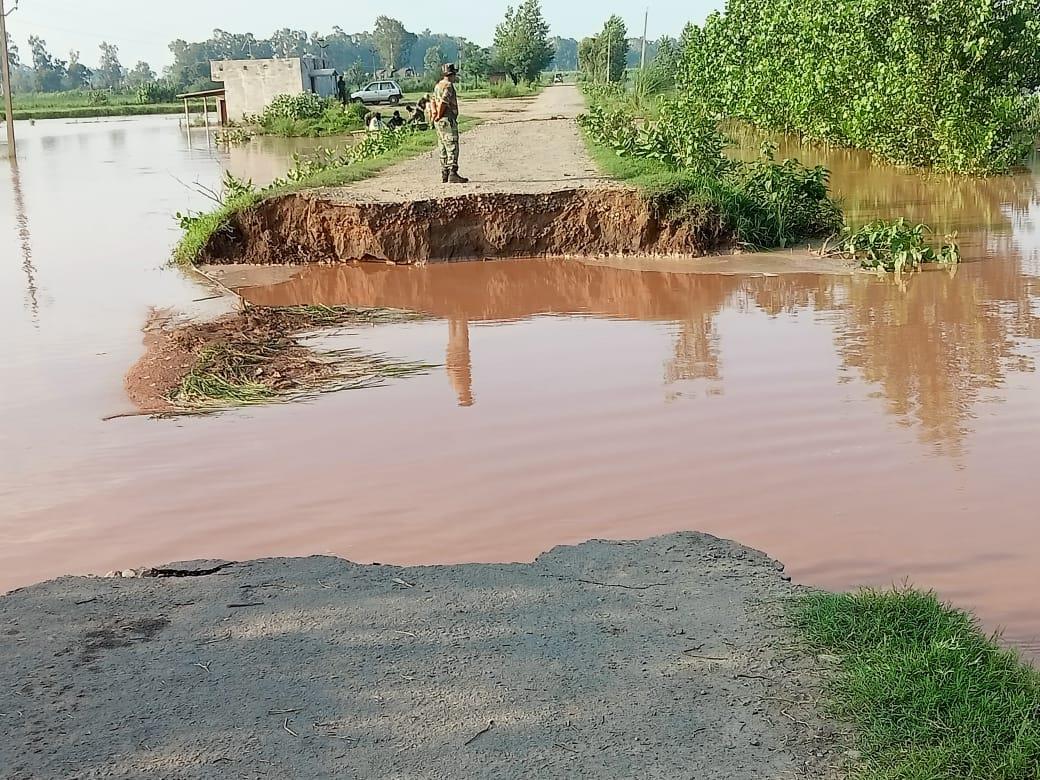 A 10-metre breach that occurred on the road leading to Dera Baba Nanak. Tribune photo

The gushing waters of the Ravi created havoc in Dera Baba Nanak tehsil following which the district administration ordered the evacuation of scores of villagers and livestock from several villages.

Gurdaspur BSF DIG Prabhakar Joshi and Deputy Commissioner Mohammad Ishfaq camped at the site throughout the night. Boats were pressed into service to rescue villagers.

An observation post of the BSF was damaged even as nearly a hundred jawans worked for nearly 18 hours to ensure some order was restored. A 10-metre-long breach occurred on the road leading to Dera Baba Nanak.

DC Ishfaq said the road was being repaired by the BSF, PWD and Mandi Board officials. Jawans of the 10th battalion of the BSF were working overtime to make certain the breach was plugged by tomorrow morning.

This road assumes significance as the BSF moves its jawans, vehicles and heavy equipment to strategic places near the international border on this stretch from its command headquarters in Gurdaspur. An official claimed while there had been no loss of life, the damage to property was being assessed.

Meanwhile, Ranjit Sagar Dam Chief Engineer Sher Singh said the water in the dam was at manageable level. “If the need arises and the water level in the dam rises following heavy rainfall, we will release the excess water.”

Losses incurred by the area farmers will be compensated by the Gurdaspur administration. I have ordered a girdawari to ascertain the losses. The water subsided by noon and the road will be thrown open to normal traffic by Thursday morning. — Mohammad Ishfaq, DC