Committee was formed to analyse resaons for poor show in poll 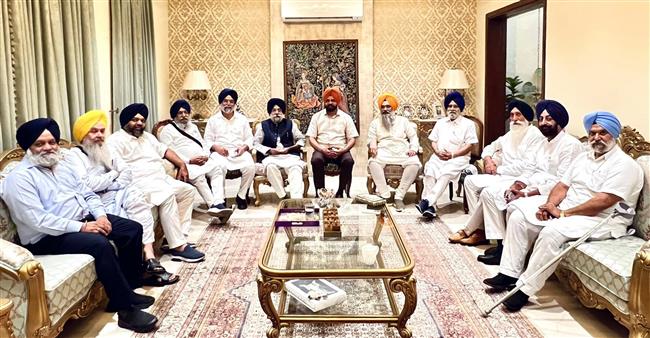 The rebellion brewing in the Shiromani Akali Dal (SAD) over drubbing of the party in the 2022 Assembly poll took a new turn yesterday.

On Monday, various party leaders held a meeting at the residence of Ravi Karan Singh Kahlon, son of former Speaker Nirmal Singh Kahlon, to impress upon SAD chief Sukhbir Singh Badal to implement the recommendations of the Iqbal Singh Jhunda committee, which was formed to analyse the reasons for poor show during the Vidhan Sabha elections.

The leaders said they would meet Sukhbir in the coming days and would discuss the strategy to strengthen the regional party by implementing the recommendations of the Jhunda panel.

They also favoured change of leadership in 114 Assembly segments, fixed term for SAD president and separate body for the SGPC.

Notably, Ayali has been meeting senior leaders to draw their attention towards the party’s dwindling graph in the state.

While Sukhbir had announced his support for the NDA candidate Droupadi Murmu during the Presidential poll, Ayali had boycotted the election.

He had alleged that he was not consulted by the party chief and issues related to Punjab remained unresolved.

Sources said one of the leaders even went on to add that Sukhbir should not desist from stepping down to save the party.

Will work for welfare of masses