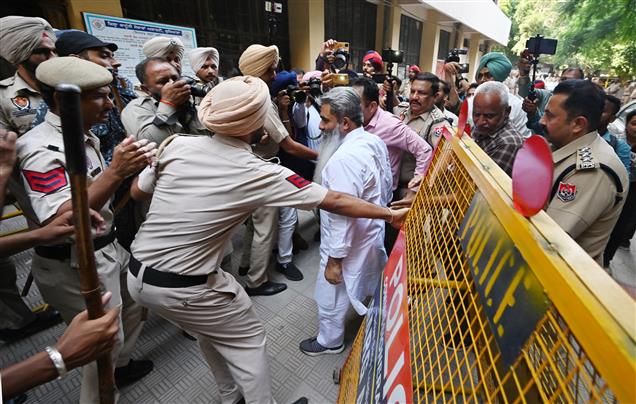 Special Public Prosecutor Balwinder Singh had sought seven more days police remand on the plea that the Vigilance Bureau (VB) has nominated another PA of the former minister, Inderjit Indi, in the case.

During the investigation, in CCTV footage, Indi was seen taking a bag from a man in the Krishna Nagar area and since then he was not traceable. It was apprehended that prior to the VB raid at the former minister’s house, several incriminating documents or articles were removed and handed over to Indi, who has gone into hiding.

He also apprised the court that during investigation, it had surfaced that Ashu was having stakes in a Dubai hotel and that aspect was yet to be verified. Moreover, a chartered accountant of Ashu was called for producing documents, particularly related to investments, but he had sought time till August 29.

Meanwhile, the VB has traced six properties of alleged PA Meenu Malhotra, who was nominated in this case and is still untraceable.

On the other hand, defence lawyers VB Handa, Parupkar Singh Ghumman and Raman Kaushal opposed the contentions of the VB. It was submitted that the transportation tender policy was challenged before the High Court and the same plea was dismissed being devoid of merit. So, the VB has no right to claim that the tender allotment policy was wrong.

The defence lawyers also submitted that the demand for the extension of remand was not related to the alleged tender allotment scam. Rather it was to know the investments and properties of the accused, which was not the subject matter of this case. Moreover, in such cases only an SP rank official was competent to investigate the matter, whereas the present case was being investigated by a DSP rank official.

Ashu was produced before the court this afternoon amid tight security and the proceedings continued till 5 pm.