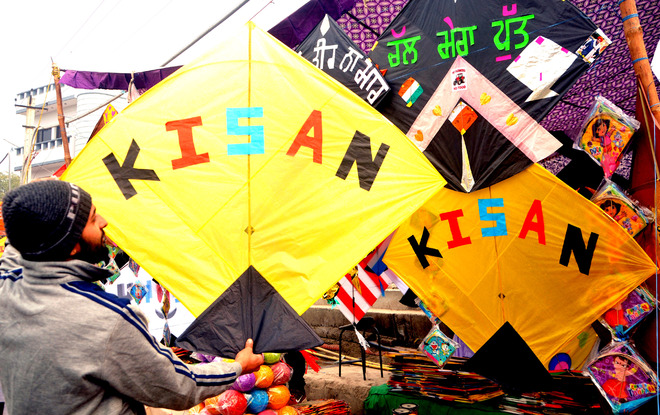 A kite-maker lends support to the farmers’ protest ahead of Lohri in Amritsar on Monday. Tribune photo: Vishal Kumar

Reacting to the Supreme Court’s observation on three agricultural laws, the Bhartiya Kisan Union (Ugrahan) said repealing the laws was the only way out.

Joginder Singh Ugrahan and Jhanda Singh Jethuke, president and senior vice-president of the BKU, said their struggle would continue till the laws were repealed.

“The reprimand of the central government by the Supreme Court over not resolving this issue is certainly welcome and it is an achievement of the struggle. Further reprimand by it over not entering into consultations with the farmers during the presentation and passing of these laws is a confirmation of the dictatorial attitude of the central government, corroborates its indifferent attitude and establishes further that the peasant struggle is legitimate,” they said.

Ugrahan said it was clear by now that peasants all over India had declared these laws to be against their interests and that they were unconstitutional. The organisation expressed hope that the Supreme Court would tell the government to repeal these laws by considering the will of the people.