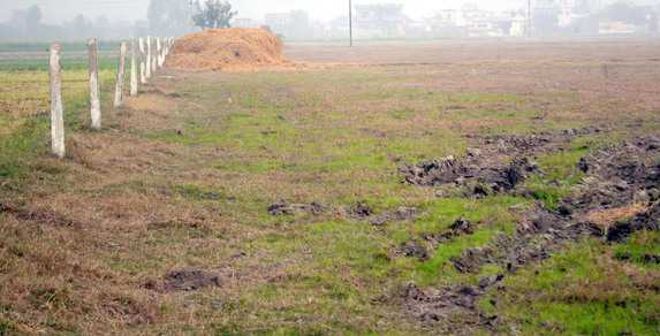 In a major blow to the nexus of land mafia and revenue officials, the Punjab Government on Wednesday ordered that 3,603 acres of panchayat land at Majri village in Mohali (New Chandigarh), which had been transferred to individuals, be restored to the village panchayat. A Vigilance Bureau probe has been recommended against the officials who were involved in the land grab.

The panchyat land, including hills and choes, had been grabbed by influential politicians, bureaucrats and others. The decision came after the issue was raised at the Chief Minister’s Janata Darbar in Chandigarh last month.

The scam has caused huge financial loss to panchayat and public... Hundreds of acres of land has been grabbed in connivance with consolidation authorities, revenue officials and panchayat members. —Anurag Aggarwal, Financial commissioner, Revenue

Calling it “a big shamlat land grab scam”, Financial Commissioner, Revenue (FCR), Anurag Aggarwal not only quashed an “illegal order” of April 22, 1991, by the Consolidation Officer in the garb of which bigwigs had grabbed over 3,000 acres of panchyat land in the past three decades, but also restored it to the village panchayat.

Going into the genesis of the scam, Aggarwal found that as per the land revenue record (jamabandi) of Majri village, the total shamlat land in the village was 3,603 acres in 1983-84. It included 2,172-acre area under hills and 499 acres under choes.

The FCR further said the mutation should not have been sanctioned in such a hasty manner in respect of panchayat land. Even panchayat members also got the share in the shamlat land. Therefore, the matter was not raised before the higher authorities on behalf of the gram panchayat.

In the past three decades, the shamlat land was further sold by way of sale deeds to hundreds of individuals. “Land in dispute has changed many hands from time to time and it is not necessary to give notice to the fraudsters who have grabbed the panchayat land,” he said.

Referring to the Justice Kuldip Singh Tribunal report, which was constituted by the High Court, the FCR said it revealed that influential persons, including politicians and bureaucrats, had colluded to grab the panchayat land.

Terming the order passed by the Consolidation Officer and revenue authorities as illegal, the FCR said that the persons/companies who were in possession of the land in dispute as shown in the latest “jamabandi” were liable to pay for the period during which they had illegally occupied the public land. “This land scam has caused a huge financial loss to the gram panchayat and public at large,” he said.

Coming harshly on officials of the Revenue Department, he said, “Hundreds of acres of land has been grabbed in connivance with the consolidation authorities, revenue officials and panchayat members.”

He further observed that panchayat and government officials failed to protect the interest of the gram panchayat with a motive to serve their personal interest. They caused a wrongful loss to the Majri gram panchayat, he said.

Undoing the wrongs of the past 30 years, the FCR not only quashed the order, but also directed the Mohali Deputy Commissioner to restore the shamlat land to the gram panchayat in the revenue record as it existed before passing of the 1991 order. The FCR said the possession of the shamlat land be also delivered to the panchayat. He ordered the Deputy Commissioner to refer the matter to the Vigilance Bureau so that it could look into criminal misconduct of officials of the Consolidation and Revenue Departments in the matter.

April 22, 1991: The Consolidation Officer by an “illegal order” allows transfer of the land to private individuals

May 7, 1991: Land mutation sanctioned in the name of private persons. Several politicians and bureaucrats illegally own the land located in New Chandigarh

The order said the disciplinary proceedings be also initiated against Varinder Singh Dhoot, Naib Tehsildar, for conducting the partition proceedings in a hasty manner and in violation of procedure laid down under the Punjab Land Revenue Act, 1887.