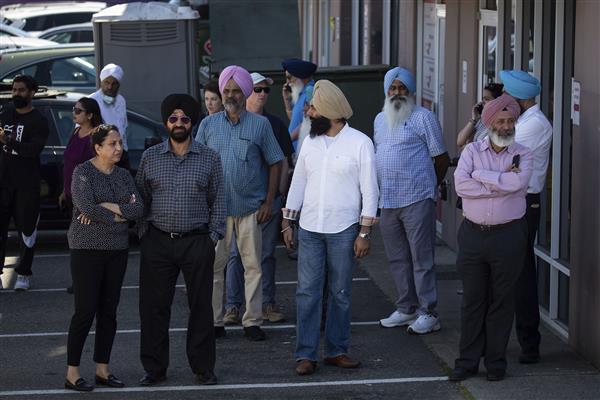 People gather at the scene as police investigate the fatal shooting of Ripudaman Singh Malik in Surrey, British Columbia, Canada, on Thursday. AP/PTI

Ripudaman Singh Malik was an “extremist warrior” with many enemies and personal disputes and played with violence in his life which likely came back to haunt him, recalled the people who knew the Sikh man, who has been shot dead in Canada.

Malik, 75, who was acquitted of murder and conspiracy charges in 2005 in the tragic 1985 Air India Kanishka terrorist bombing case, was shot dead as he sat inside his car in Surrey, British Columbia on Thursday.

"I just think there's so many potential motives,” said retired RCMP deputy commissioner Gary Bass in response to Malik's killing. He was in charge of the terrorism investigation into the 1985 Air India bombing.

“I'm not privy to the ongoing investigations on Malik right now, but I can say that from years when I was that he was involved in a number of activities that might bring him into conflict with other people,” he was quoted as saying by the Toronto Sun newspaper.

Bass said it would be speculative to suggest who might be behind the fatal shooting of the Sikh leader. He recalled monitoring a seven-hour interview Malik gave to the Air India investigators after his October 2000 arrest.

“I watched that interview. And he was a different person than he portrays in public for sure. He was cocky. He took his turban off, and he had his feet up on the desk, and really playing games,” Bass recalled.

“And coming very close to confessing and then kind of backing away … not the pious religious guy that he'd like everyone to think for sure,” he said.

Homicide investigators are now trying to figure out who killed the controversial community leader, one-time terror suspect, a wealthy businessman and founder of both the Khalsa Credit Union and Khalsa Schools, the report said.

He had also courted recent controversy for his links to printing the Sikh holy book — the Guru Granth Sahib — outside of India in contravention of a religious edict. But several sources also said Malik has had a number of personal disputes with individuals over the years, the report said.

In March 2005, Malik and his Babbar Khalsa associate Ajaib Singh Bagri, were acquitted by a British Columbia Supreme Court judge of murder and conspiracy charges in Canada's deadliest terror attack.

Air India — then the country's national airline — was bombed to retaliate against the Indian government for its attack on Amritsar's Golden Temple a year earlier, which left hundreds of Sikh pilgrims dead.

Malik and Bagri were alleged to be part of a conspiracy of a small group of British Columbia militants who placed suitcase bombs on two connecting flights leaving Vancouver airport. The deadly bags were tagged for Air India flights heading in opposite directions.

One blew up aboard Air India Flight 182 off the coast of Ireland on June 23, 1985, killing all 329 people aboard, most of them Canadian citizens. The other exploded in Tokyo's Narita Airport as it was being transferred. Two baggage handlers were killed.

Inderjit Reyat, a former Vancouver Island man, was convicted of manslaughter in both bombings.

After Malik's acquittal, he resumed his leadership roles at the Khalsa Credit Union and Satnam Education Society which operates several Khalsa schools. And he moved from Vancouver to South Surrey.

He continued to run a number of businesses including Papillon Eastern Imports — the clothing company based in the building where Malik was killed Thursday, the report said.