Roads leading to Sidhu Moosewala's murder spot light up in candle march with cries of justice for slain singer : The Tribune India 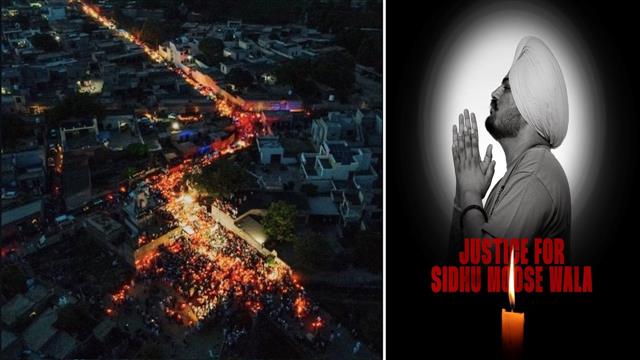 Seeking justice for slain singer Sidhu Moosewala, his parents and fans on Thursday held a candlelight march from Mansa to Jawahar Ke village, where he was shot dead by the gangsters on May 29.

People gathered in large numbers to hold the peaceful march.

The entire pathway leading to the spot where the singer was brutally ambushed was lit with flames of candles as well as cries for justice.

A user posted a picture capturing the aerial view of the march.

Meanwhile, Balkaur Singh, father of Moosewala, had said, “A panel should be formed to probe why the security cover of my son was pruned a day before he was killed. An inquiry should be conducted to find out what relation Pollywood had with gangsters. We also demand that gangster Goldy Brar be brought to India.”

He added, “As long as gangsters are ‘escorted’ by police personnel, our hearts will continue to be hurt. Where are our human rights? It’s people like us who lose their sons. My child was brutally murdered without any reason. I will not sit quietly and will continue this struggle until we get justice.”

Charan Kaur, Moosewala’s mother, had said, “Shubhdeep was born in a small house. He built a big bungalow with his hard work. We demand justice so that no parent has to bear such a loss. I am deeply pained today. We were planning to marry him off. What will we do with all this wealth and land?”