Roll of honour for 3 young bravehearts from Punjab : The Tribune India

Roll of honour for 3 young bravehearts from Punjab 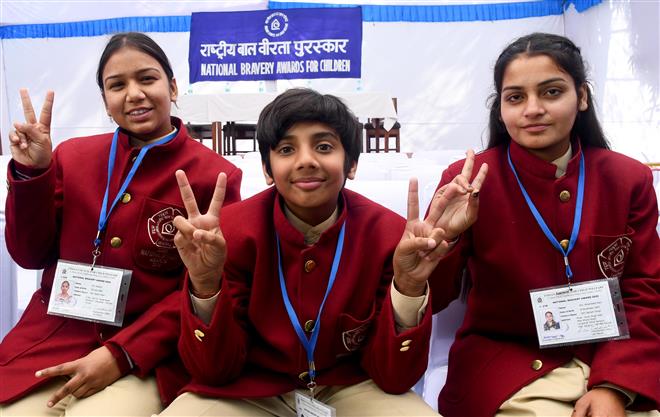 Age doesn’t come in the way of bravery. This has been proved by three children from Punjab who have been selected for National Bravery Award ahead of Republic Day.

Sixteen-year-old Amandeep Kaur displayed exemplary courage by risking her life to pull out four children from a burning school van in Sangrur district, while 15-year-old Kusum bravely fended off mobile snatchers in Jalandhar and 11-year-old Azaan from Amritsar saved several lives during a landslide in Kashmir.

Recalling the harrowing incident of February 15, 2020, Amandeep said she was seated along with other students in a school van when it caught fire on the way to the institution in Longowal village. Losing no time, she smashed the glass pane and jumped out. Without a thought for her own safety, she managed to pull out four kids from the burning vehicle.

The same year, Kusum too made headlines for her act of courage. She bravely fought two mobile snatchers who targeted her on her way home in Jalandhar. One of the snatchers even attacked her with a sharp-edged weapon and injured her. The brave teen, however, kept fighting till some people came to her rescue and got hold of the snatchers. “One of the snatchers attacked me with a knife. I didn’t stop fighting until they were caught. I didn’t fear them,” Kusum told The Tribune.

Azaan, with his spontaneous and brave act during his visit to Amarnath shrine last year, saved several lives by alerting people at a campsite about a landslide in Kashmir.

The people at the camp were immediately shifted. “I was serving langar at a camp when I saw huge rocks and water gushing towards the site. I rushed and informed police personnel, saving many lives,” the braveheart said.

The national bravery awards are given annually to children below 18 years of age for their meritorious acts of courage against all odds.