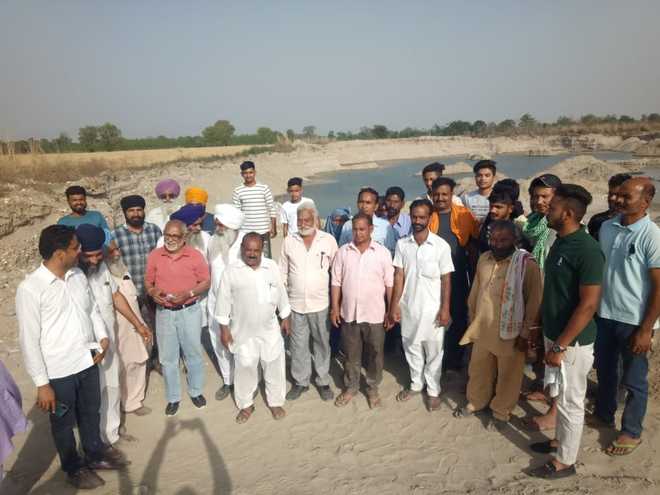 People stage a dharna against illegal mining at Algran village in Ropar on Wednesday. Tribune photo

As the authorities have failed to keep a check on illegal mining in the district, residents of several villages on the banks of Swan and Sutlej have decided to take up the cudgels against the mining mafia. A large number of people have been sitting on a dharna near Algran bridge since March 15, demanding a clampdown on the mafia.

Protesters said deep pits left after illegal mining not only posed a threat to their lives, but had also pushed groundwater further down, rendering several tubewells useless. The issue was also highlighted in the columns of this newspaper on July 15, 2019. Earlier, the riverbed was dug up to 10 feet and groundwater recharged through it used to maintain high levels in adjoining villages.

Experts say a riverbed is dug up to 50 feet and the water recharge also starts from the same depth, resulting in groundwater depletion. This also leads to groundwater pollution.

Akash Rana of Nangran village said that they were not against the regulated mining, but the plunder of sand and gravel and the non-availability of potable water had forced them to protest.

Admitting that illegal mining was rampant in the area, mining department officials stressed they were taking strict action against offenders.

District mining officer Sukhwinder Singh Kalsi said he met the protesting villagers last week and assured them of action against the mafia. Five persons had already been identified and cases would be registered against them by tomorrow and efforts were being made to identify others also, he said.