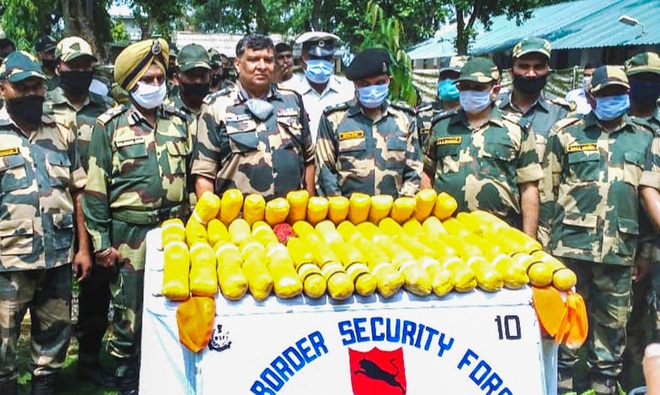 BSF officials with the seized consignment in Gurdaspur. PTI

Pakistan smugglers, taking advantage of the strong Ravicurrent, tried to push towards the Indian side Rs 300 crore worth of high-grade heroin stuffed in football bladders, but for alert Border Security Forces (BSF) personnel.

Around 3 am, the BSF men at the Nangli Ghat picket noticed 60 multicoloured bladders tied together floating in the river. The bladders were covered with water hyacinth as a disguise and the smugglers were trying to control these using a 1,500m nylon rope.

The BSF seized the heroin and was in the process of handing it over to the Narcotics Control Bureau sleuths.

DIG (Gurdaspur sector) Rajesh Sharma said he received a call at 3.15 am of 10th Battalion personnel having “sighted unusual movement of some unidentified substance in the river”. He along with fellow officers reached the scene within half an hour. Sharma confirmed the consignment was being controlled from the other side of the International Border using a long rope. “The Ravi is in spate and smugglers were trying to take advantage of this,” he said. Batala SSP Opinderjit Singh Ghuman said they were trying to track down the intended recipients.

Chautauqua Institution, where the author was due to speak, w...