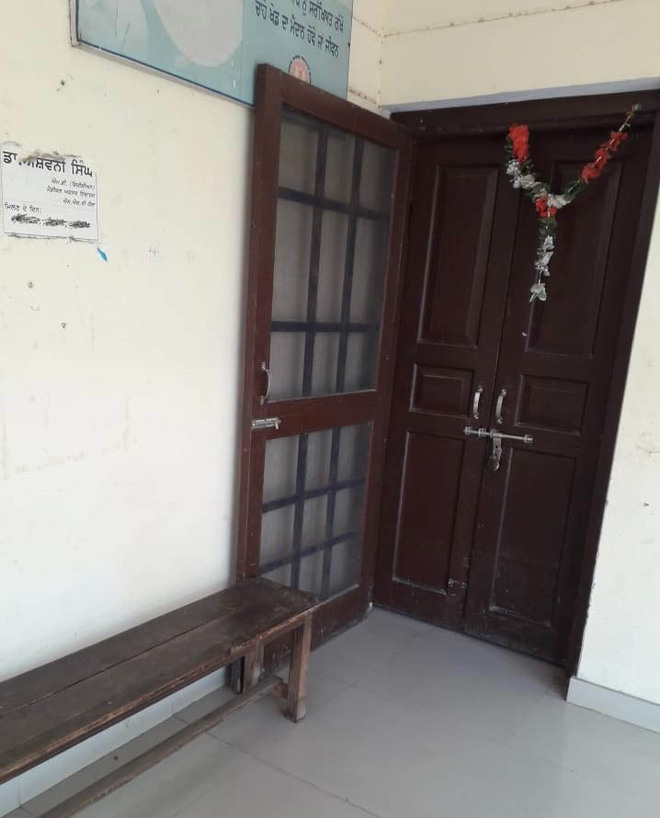 A closed dispensary in Ludhiana.

Amid a high fatality rate in rural areas in the ongoing Covid-19 wave, villagers have been left in the lurch as most dispensaries are lying shut as the staff have been put on Covid duties elsewhere.

Due to this, many villagers reach hospitals late in critical condition. According to Health Department data, 83.92 per cent patients from rural areas visited a hospital when their condition deteriorated, only 0.11 per cent went to a hospital after showing moderate Covid symptoms and 7 per cent after getting mild symptoms.

In Punjab, there are 1,183 dispensaries having 765 rural medical officers (RMOs). Before the pandemic, the OPDs in the rural dispensaries used to get nearly 30,000-35,000 patients per month.

“We go to the dispensary in our village whenever we face any health problem. When the doctors are needed most, the dispensaries are lying shut. Generally, rural folk avoid going to a private hospital. Recently, we lost a close relative to Covid as he kept ignoring his health and when he was admitted to a hospital, the doctors said it was too late,” said Kultar Singh from Kanganwal village. Dr JP Narula, state president of Rural Medical Services Association, said the dispensaries opened for a few months when the cases declined in between the two waves. “People would often come and tell us that we (RMOs) abandoned them in the hour of need. They are not ready to understand the fact that we were put on Covid duty. They have formed a bond with doctors over the years and they are not ready to go to hospitals in cities as they feel lost there,” said Dr Narula.

Dr Bishav Mohan, a senior cardiologist at Dayanand Medical College and Hospital, who is also a member of Covid-19 task force formed by the state government, said the main reason for higher fatality rate among the rural population was late reporting and lack of testing. “They come to a hospital only after their condition has deteriorated. As a result, the casualty rate in the rural population is going up,” said Dr Mohan.

Minister for Rural Development and Panchayat Tript Rajinder Singh Bajwa said it was a fact that rural population had been ignored since the RMOs were doing various Covid-related duties since the outbreak. “Now that the positivity and case fatality rates are increasing in villages, rural population also needs medical care near their homes. In the next Cabinet meeting, I will discuss the ground reality with the Chief Minister and try to call the RMOs back to the dispensaries,” said Bajwa.