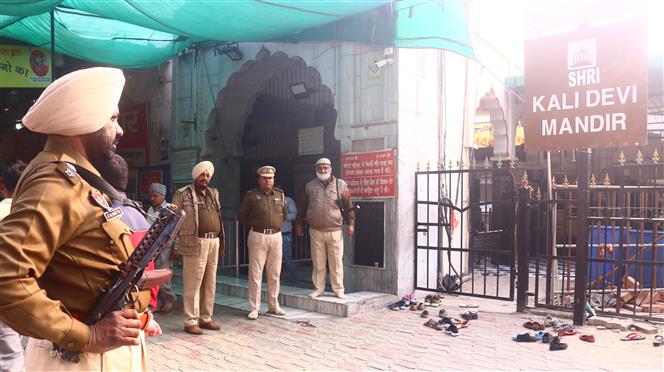 An alleged sacrilege attempt was made at the historic ‘Mata Kali’ temple in Patiala, on Monday.

Patiala Senior Superintendent of Police (SSP) Sandeep Garg said they had already arrested the accused and an FIR was being lodged under relevant sections. “After the incident, additional police has been deployed there. The accused is being thoroughly interrogated,” he added.

Meanwhile, Patiala Deputy Commissioner Sandeep Hans said he had already called a meeting — with all the stakeholders — over the issue.

Notably, the CCTV footage of the entire incident has already gone viral on social media. In the video, a masked man, scaled the enclosure — where the idol of Kali Mata was kept — and allegedly attempted to deface the idol. The man was immediately pushed away from the idol by the priest.

The accused has been identified as Rajdeep Singh.

Bikram Singh Brar, Station House Officer, Kotwali, said the accused has been booked under Section 295-A and 354 of the Indian Penal Code.

Following the incident, members of the Bharatiya Janata Party (BJP) issued condemnation of the incident and demanded a high-level investigation.

Meanwhile, Chief Minister Charanjit Singh Channi, tweeted: “Some vested interests are continuously trying to destabilise the social harmony of Punjab on the eve of the upcoming elections, but I will not let them be succeed in their malicious motives.”

Urging the authorities to take firm and stern action against the culprits, Kaur said, these were being deliberately done to hurt the religious sentiments of people.

She appealed people not to get provoked with such attempts as the clear motive of those trying these is to disturb peace in the state.