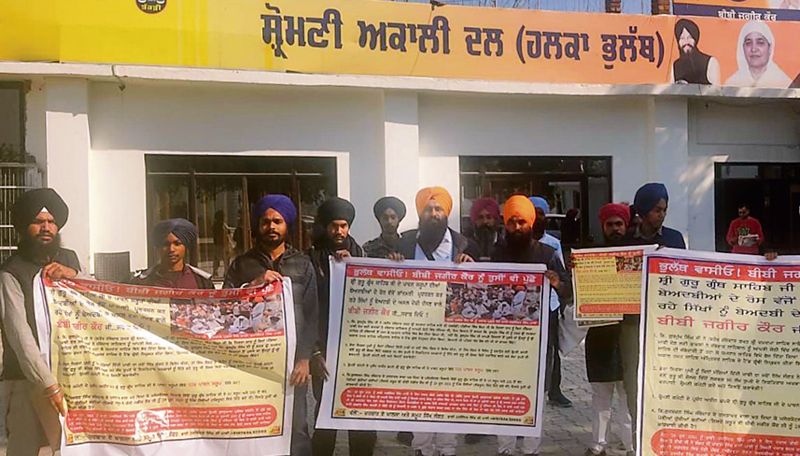 A poster seeking comment from Bholath candidate Bibi Jagir Kaur on the sacrilege cases has been released by some Sikh groups.

Ahead of the polls, Sikh groups led by Darbar-e-Khalsa’s Bhai Harjinder Singh Majhi and Harjit Singh Dhapai today posed questions to former SGPC president on the issue of sacrilege cases. A jatha of the Sikh organisations today approached the SAD leader and Panthic matriarch at her residence in Bholath. The posters were pasted in front of her office and a “Lahnat Pattar” was also handed to the office-bearers present on the occasion. The jatha later decided to embark on a door-to-door campaign to raise the issue.

Members of the organisation had earlier ran a campaign for the release of Sikh prisoners, on which they were recently given assurance by Union Minister Gajendra Singh Shekhawat.

Addressing Bholath residents, Bhai Harjinder Singh sought an answer from Bibi Jagir Kaur on the vilification of peacefully protesting Sikhs. He said the same questions had been asked from her at Sangrur’s Jauliyan village on 29 June, 2021, while she was still the SGPC president. They said despite of assuring a written reply on the issue, Bibi Jagir Kaur instead held a panthic gathering at the secretariat of the Akal Takht on July 26 to cast aspersions on the peaceful protesters, instead of punishing those guilty of sacrilege.

The team of the Darbar-e-Khalsa also disbursed the posters in the constituency.