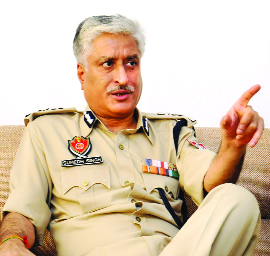 Former DGP Sumedh Singh Saini, the main accused in the Balwant Singh Multani murder case, appeared before the Special Investigation Team (SIT) of the Punjab Police at the police headquarters in Mohali on Friday.

Sartej Singh Narula, special public prosecutor for state, said instead of joining the probe on September 23, Saini, along with his counsel, appeared before the court on Friday and sought withdrawal of his arrest warrant.

Accompanied by a counsel, Saini arrived at the headquarters at 8:30 am and left for the Mohali district court around 9:40 am. Members of the SIT refused to investigate him, saying they would first summon him.

Saini then appeared before the court, which had earlier issued an arrest warrant against him and had directed him to appear on or before September 25. The court, accepting Saini’s plea for the withdrawal of arrest warrant as the Supreme Court has already stayed the arrest, issued orders to the state for a reply and till then recalled the previous arrest warrants as it now turns infructuous.

The next date of hearing is September 30.

Advocate HS Dhanoa, counsel for Saini, said they had appeared before the duty magistrate and filed an application seeking cancellation of arrest warrants issued by the court on the grounds that the Supreme Court has already given an interim stay on his arrest. The court asked the state to file its reply.

A local court had, on September 12, issued a non-bailable arrest warrant against Saini. The warrant was issued following the request of the SIT to get assistance from other state police departments to arrest the former DGP.

Sartej Singh Narula, special public prosecutor for state, said instead of joining the probe on September 23, Saini, along with his counsel, appeared before the court of Judicial Magistrate (First Class) Ravinder Kaur, Mohali, on Friday, with an application seeking withdrawal of his arrest warrant.