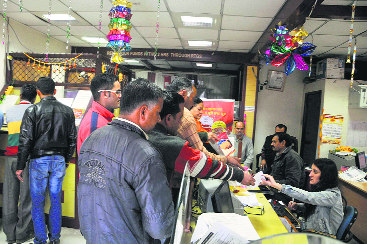 As many as 25,000 ASHA workers will face the heat as the Punjab Government does not have data on the basis of which compensation is paid to them

In the midst of Covid outbreak, one question worrying government employees, teachers and ASHA workers is whether they will get their salaries on time.

As many as 25,000 ASHA workers will face the heat as the Punjab Government does not have data on the basis of which compensation is paid to them. Accredited social health activists (ASHA) are community health workers deputed in rural areas by the Ministry of Health and Family Welfare as part of the National Rural Health Mission (NRHM).

Workers get a monthly remuneration of Rs 2,000 and incentives for undertaking an assortment of services for the welfare of people, particularly those living in the rural areas. Paramjit Kaur Maan, president of the Punjab Asha Workers Association, said due to Covid scare and subsequent curfew, officials have not prepared this month’s data. “Our workers will have to do with just Rs 2,000 this month. This is grossly unfair. To complicate matters, we have been asked to fan out in villages to trace suspects without sanitisers, gowns, gloves or even masks,” said Maan.

Rajwinder Kaur, president, Gurdaspur unit of the association, said they would be meeting Deputy Commissioner Mohammad Ishfaq to ensure they got compensation. Cabinet Minister Sukhjinder Singh Randhawa said he was apprised of the situation and would do his best to impress upon the health authorities to depute officials who would prepare data on the basis of which compensation could be calculated.

In Jalandhar, government schoolteachers are a worried lot. They said bills were prepared by the DDOs at the district level and the salary was deposited in their accounts. But amid the lockdown, getting salaries seemed difficult this month. One of the government schoolteachers said when everything was shut, he did not think they would get the salaries. “The entire work is done at the district level and when no one is visiting any office, how will we get it,” he said. District Education Officer Harinder Pal Singh said they had already received orders of giving salaries to the employees and scanned copies of the bills would be sent online to the treasury office.

In Sangrur and Barnala districts, a majority of the government employees are panicky since the imposition of curfew. Most have made arrangements to run their houses in case they do not get their salaries.

In Amritsar, Shivdular Singh Dhillon, Deputy Commissioner, said as per the advisory issued by the Central Government, treasuries would be operational during the curfew period.

He said a couple of employees in the accounts section dealt in salary disbursal, which directly went into the accounts of the employees. Nitish Singla, Joint Commissioner of the MC, said all arrangements were in place to disburse salaries on time.

Says ‘Act East’ and ‘Neighbourhood First’ policies will have...