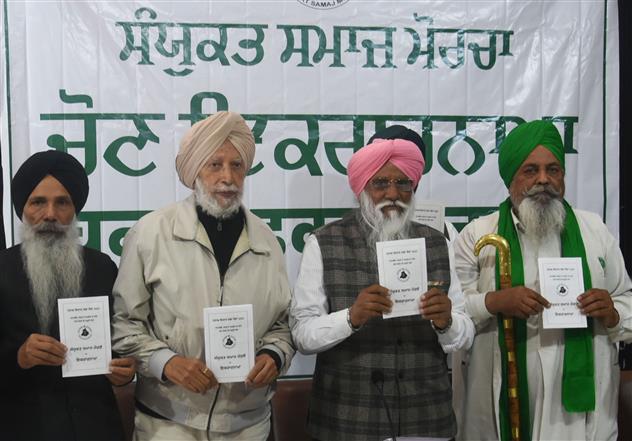 Putting Punjab farmers on a pedestal, the Sanyukt Samaj Morcha (SSM) and BJP-led NDA alliance, both at different ends of political spectrum, have promised farm debt waiver, free power for irrigation and easy access to loans.

The ideological dichotomy between the two is jarring, considering the SSM is the outcome of the year-long farmers’ struggle against the BJP-led Centre’s three farmer laws (these have since been withdrawn). In spite of this, being in the election fray has propelled both to come up with almost similar agendas for key constituent, the farmer, the same day.

This is the first time that such a pro-farmer poll agenda has been brought out in Punjab, even though it was necessitated in the agrarian state, where elections are being held in the shadow of a year-long agitation, which led to nearly 700 farmers losing their lives.

The promises made by the BJP to farmers today are as much a necessity for them as for the SSM. The latter, which is largely perceived in Punjab as being anti-farmer, has no choice but to come up with a pro-farmer rural manifesto to get political credence here.

The BJP has gone all out by promising a complete debt waiver for farmers (all types of debts) having less than 5 acres and a guaranteed MSP on fruit, vegetable, pulses and oilseeds.

The SSM’s “ikrarnama” does not promise a waiver, but a minimum monthly income of Rs 25,000 for each farmer family (there are 10 lakh operational landholdings) and opening of farm trade via land route with Pakistan, through Wagah and Hussainiwala. Its manifesto also promises streamlining work of the revenue department; annulment of PPAs with private companies; toll-free highways; ending “mafia raj”; and setting up an accountability commission, among other things.

Both have tried to give a futuristic agriculture agenda — promoting the agriculture/farmer entrepreneurship and taking proactive steps to stop the depleting groundwater table, providing shamlat land to landless farmers; and promoting cooperative farming.