Says movement of people not monitored in containment zones 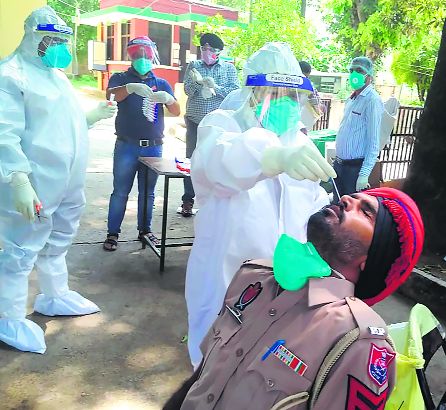 The government policy on testing gave a fertile ground to rumours, due to which the state’s Covid control programme suffered a setback, a two-member Central team has found.

The final report was submitted to the state government after a presentation on Wednesday. The meeting was attended by Principal Secretary Hussan Lal, Secretary (Health) Kumar Rahul, Director (Health Services) Dr Avneet Kaur and various other senior officials.

Punjab is probably the only state in the country where wild rumours regarding Covid-19 were spread. The report observed that to increase Covid testing, the state government gave sampling targets to field health officials. Following this, health officials at some places went overboard to meet the targets and started collection of samples. Such steps led to spread of rumours.

Apart from that, the report found that Punjab’s case fatality rate (CFR) was very high because of the high load of non-communicable disease, like hypertension, diabetes, cancer and chronic respiratory diseases. Because of lack of trust in state’s healthcare infrastructure, people were preferring self-medication at home and reaching the hospitals late.

Besides, there were reports that state’s contact tracing was very poor. In certain districts, it was not being carried out at all. The team also pointed out the poor management of containment or micro-containment zones. During field trips, the team found that certain areas were just named containment zones, but the administration did nothing to check the movement of people in and out of these zones.

Dr Avneet Kaur said the state government had already taken care of the issues raised by the team. “We have takes measures, like walk-in sampling and home isolation, to control the scare among people,” she added.