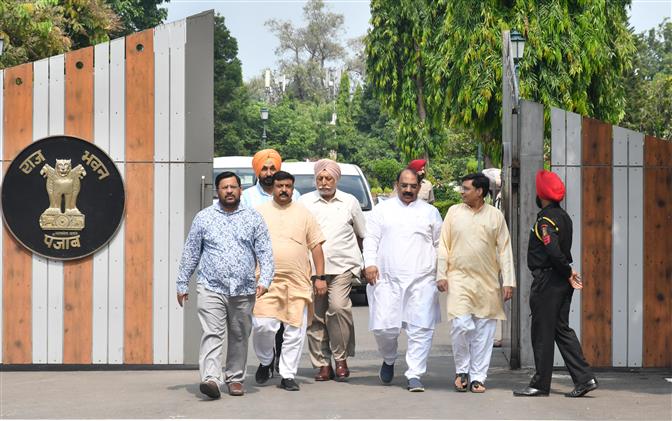 State BJP chief Ashwani Sharma and other party leaders come out after meeting the Governor in Chandigarh. Pradeep tewari

Launching a fierce attack on the Congress leadership for its silence over the BJP’s “poaching attempts” in Punjab, the Aam Aadmi Party (AAP) today called the Congress a “B-team” of the BJP and said the party was clandestinely working for the saffron party to cliff off the progress and development of Punjab by any means.

SAD’s Bikram Singh Majithia has demanded a CBI probe into Harpal Cheema’s allegation that the BJP had offered Rs 25 crore each to 10 AAP MLAs to jump ship. “The CBI probe is necessary since the government has neither made the FIR public nor has taken action against any BJP leader or middlemen involved,” he said. TNS

Addressing a press conference at the party headquarters here, Punjab Finance Minister Harpal Singh Cheema said it was humorous that the Congress, which was the latest victim of the BJP’s “poaching” in Goa yesterday, dared to question AAP for proof rather than attacking the Modi government for its “wicked politics” and toppling governments in various states.

“None of the Congress leaders dared to question the BJP, but asked us for proof of BJP’s poaching attempts even when it is happing with their party in Goa and other states,” Cheema said.

He said Congress president Sonia Gandhi was facing an ED probe and to save her, the Congress was afraid to utter anything against the BJP.