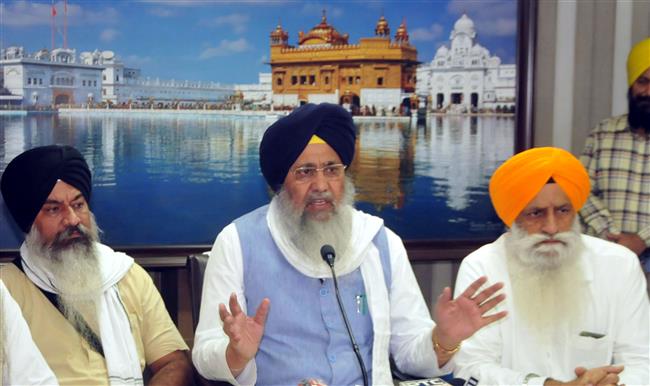 Amid allegations and counter allegations, a day after the clash between the SGPC task force and members of Sikh organisations protesting over missing saroops inside the Golden Temple complex, the SGPC has got registered an FIR against 50-60 Sikh activists.

Following this altercation that left at least 15 persons from both the sides injured, protestors were disbursed and the site of protest, opposite to Teja Singh Samundri Hall, was barricaded amid heavy deployment of police in plain clothes.

This was the second brawl between the protesting Sikhs and the SGPC task force. On September 15, an ugly clash had occurred when some Sikh activists and Nihang organisations which were to join the agitation outside Teja Singh Samundri Hall were intercepted by the SGPC task force.

Declaring to put a ‘blanket ban’ on holding any protest inside the Golden Temple complex in future, SGPC president Gobind Singh Longowal blamed that it had happened under the patronage of Congress leadership which intend to vitiate the atmosphere.

He said that armed with kirpan and sticks, they attacked our staff members, including a ‘dharmi fauji’ and Sukhdev Singh Bhoora Kuna, additional secretary, and damaged his vehicle.

These were the members of various Sikh outfits, including Guru Granth Sahib Satkar Committee, staged sit-in outside Teja Singh Samundri Hall since September 14.

Terming it as a ‘biased’ action, Balbir Singh Muchchal, head of satkar committee, said that the SGPC management has manipulated the clash episode in its favour, yet they would continue to contest the SGPC for concealing the whereabouts of missing 328 saroops.

“The police took no time to lodge FIR against us, but never bothered to reach our members who were lying injured in the hospital,” said Muchchal.

On the other hand, Longowal blamed that some of them attempted to disrupt the traditional ‘maryada’ of Golden Temple, loitered in Shrine complex in inebriated condition, locked the entrance gates of Teja Singh Samundri Hall.

He believed that the satkar committee members were patronised by Congress to divert the attention from the farmers’ protest against farm laws.

“Ever since these so called Sikh sympathisers sat on protest, SGPC has been providing them ‘langar’ and spared rooms to accommodate them. Our officials also initiated talks with them several times, but they never inclined to reach any conclusion and had repeatedly been indulging in brawl with our staff members and officials,” he said.