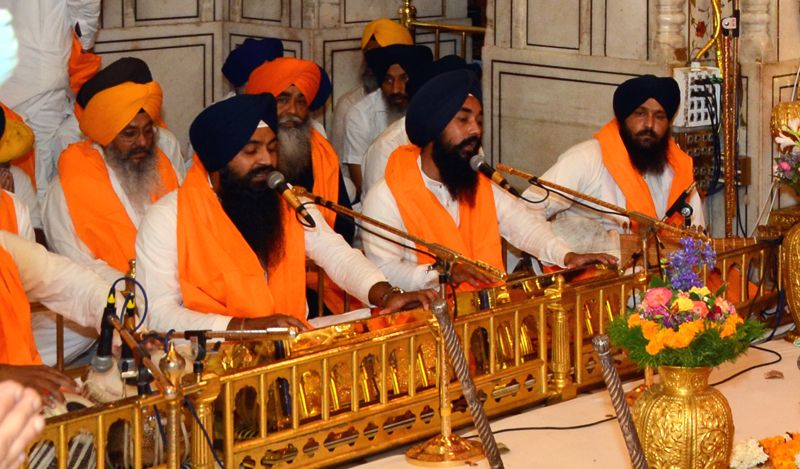 File photo of ragis performing kirtan at the Golden Temple with harmoniums.

Putting to rest speculation over phasing out harmonium from “Gurmat Kirtan” at Golden Temple, the SGPC has clarified there were no such immediate plans, yet efforts are on to comply with the Akal Takht’s directions of reviving the old tradition of performing kirtan accompanied by “Tanti Saaj”.

May hold on to it

I believe, after we reintroduce Tanti Saaj fully, harmonium will still be there in practice. — Harjinder Singh Dhami, SGPC President

“Tanti Saaj” are string instruments such as taus, dilruba, rabab, dhad and sarangi used in kirtan performance since the beginning of Sikh history. The ‘hazuri raagis’ (hymn singers who play instruments) of Golden Temple have expressed concern over their job prospects.

However, SGPC president Harjinder Singh Dhami said wrong interpretation of Akal Takht directions had led to unnecessary anxiety. “Takht has given three years. We will try to revive the Tanti Saaj tradition in a phased manner only at Golden Temple. Till that time, the existing pattern of kirtan recitation will continue. Harmonium prevailed for over a century at all Sikh shrines, including Golden Temple. I believe even after three years, if we are able to reintroduce Tanti Saaj fully, harmonium will still be there in practice. It could be put to use along with the Tanti Saaj during kirtan,” he said.

On May 3, after holding Five High Priests’ meet, officiating Jathedar of Akal Takht Giani Harpreet Singh had passed a ‘Gurmata’ (a resolution in the name of Guru) asking the SGPC to re-introduce the ‘puratan kirtan’ traditions fully at the Golden Temple within three years. However, this ‘Gurmata’ has no mention of discarding the harmonium. Takht has also sought engaging of Tanti Saaj-trained teachers for Gurmat Sangeet students.