The SGPC was constituted on November 15, 1920, and was notified through a Sikh Gurdwara Act in 1925 by the then British government 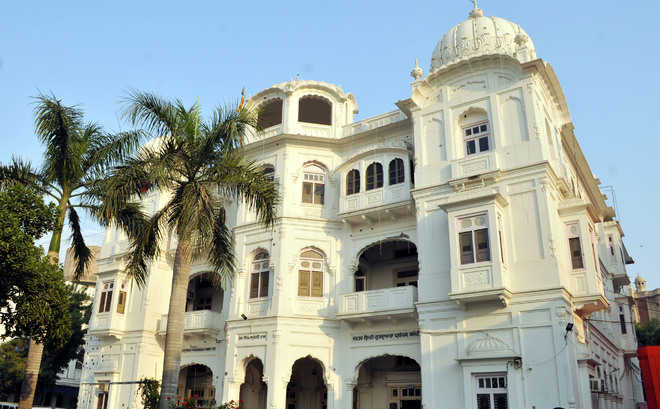 The Shiromani Gurdwara Parbandhak Committee (SGPC), which manages Sikh shrines and runs a 'langar' (free community kitchen) for hundreds of thousands of people on a daily basis at different gurdwaras, on Sunday celebrated its centenary in a low-key manner owing to the coronavirus pandemic.

The main function to mark the centenary was organised at the Akal Takht, the highest temporal seat of the Sikhs, and Manji Sahib in Darbar Sahib complext here.

The SGPC was constituted on November 15, 1920, and was notified through a Sikh Gurdwara Act in 1925 by the then British government.

Its present President Gobind Singh Longowal told the media that the SGPC's glorious history would be showcased through documentaries and books. He said that its executive committee has decided that 100 years of Nankana Sahib Shaheedi Saka would be observed in February next year.

The SGPC was raised to wrest the control of Sikh shrines from 'mahants' and priests. The prominent gurdwaras included the Golden Temple.

In its initial years, the SGPC also fought against untouchability and the caste system.

Besides giving 'karah prasad' and maintaining shelter homes and helping the poor and needy children as well as students and performing a host of other social activities, the SGPC took major steps to provide succour to the Sikhs in Pakistan and Afghanistan as well, sending relief material in earthquake-battered Nepal in 2015.

The cash-rich SGPC runs the world's largest community kitchen -- feeding an average 50,000 devotees on weekdays and over 100,000 on weekends and festivals with freshly cooked food at the Harmandar Sahib, popularly known as the Golden Temple, in Amritsar.

Besides the Golden Temple, the SGPC runs the 'langar' service in other famous Sikh shrines like Takht Keshgarh Sahib in Anandpur Sahib (where Khalsa Panth was established on April 13, 1699, by tenth Sikh master Guru Gobind Singh), Takht Damdama Sahib at Talwandi Sabo in Bathinda district and scores of other gurdwaras under it.

The 'langar sewa' is part of the Sikh religious ethos started to emphasise equality in society regardless of religion, caste, colour or creed. The completely vegetarian langar service is funded from donations made by people at gurdwaras. IANS