Short-duration paddy varieties can turn the tide : The Tribune India 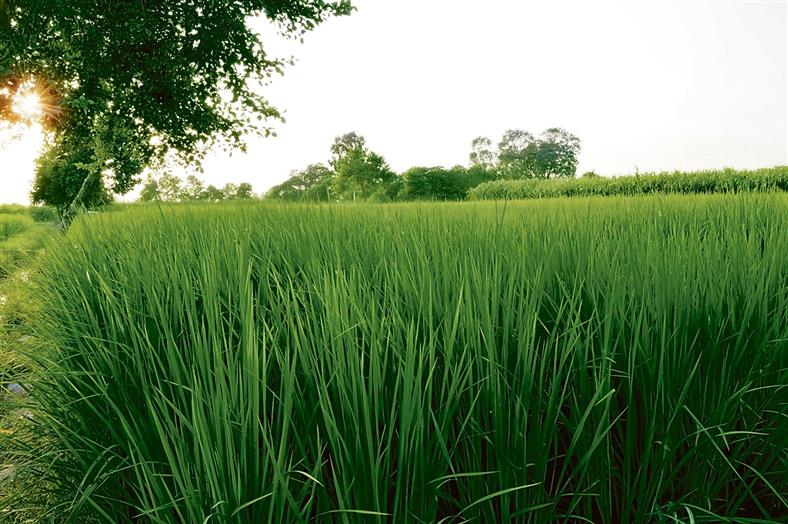 Source: Statistical Abstract of Punjab and Department of Agriculture and Farmers’ Welfare, Punjab

India faced severe food shortage during the 1950s and 1960s. In the second half of the 1960s, high-yielding varieties of wheat and paddy and their complementary production-protection technology packages became available. The government formulated a landmark policy of fixing the MSP and procurement of the produce, and took many other initiatives for national food security. These developments gave an impetus to paddy cultivation in Punjab. From 1965-66 to 2019-20, the area under paddy increased 10.7 times (2.93 to 31.41 lakh hectares) and the production 43.1 times (4.39 to 189.12 lakh tonnes) in Punjab. During the same period, the number of tubewells increased from 26,000 to 14.76 lakh and the cropping intensity from 129% to 190% as a result of intensive agriculture. With these developments, Punjab became the food bowl of the country and helped the nation to not only become food-secure but also an exporter. This was, however, accompanied by some challenges of which depletion of groundwater resources is the most serious one.

To tackle this situation, short-duration paddy varieties and water-saving technologies, notably laser land levelling and tar-wattar DSR (direct seeding of rice), have been developed. The state government also issued/passed an ordinance/Act in 2008-09 to ensure the transplanting of paddy after a notified date. These interventions, accompanied by campaigns on groundwater-saving, did slow down the rate of water depletion but did not fully check the same. Thus, there is an urgent need to create more awareness among the masses in this regard. With this objective, economic returns from the cropping system in two regions of the state having a similar cropping system but a contrasting groundwater table scenario is being presented.

During 2018, the lowest groundwater table was observed in Sangrur district (32.4 metres) followed by its neighbouring Barnala district (29.7 metres). These districts also occupied the top positions for the rate of fall of groundwater table between 1998 and 2018. These districts, having paddy as the main kharif season crop accounting for about 91% of the area, were selected to represent the most threatened region as far as the annual fall of groundwater level and its depth are concerned and designated as Region-I (R-I). For comparison, two other contiguous districts identified are Amritsar and Tarn Taran, representing a region contrasting with R-I on the groundwater scenario but having a similar cropping system (92% of kharif area under paddy). These districts are designated as Region-II (R-II). The average annual rate of water table fall in R-II (1998 to 2018) was almost half (43-57 cm) than that in R-I (103-107 cm).

Ten other districts having a higher groundwater table than Amritsar-Tarn Taran were excluded from the analysis (the exclusion of these districts is discussed in detail in PAU’s monthly magazine Progressive Farming, April 2020).

Paddy and wheat are the predominant crops occupying about 90% of the cultivated area in both regions. Basmati was cultivated in about 7% and 56% of the kharif area in R-I and R-II, respectively. The varietal pattern of wheat and basmati is similar in both regions but in the case of parmal, there is a contrast. In R-I, long-duration paddy varieties (Pusa 44, Peeli Pusa) were cultivated on about 55% of the parmal area and the short-duration varieties (PR 121, PR 126 and PR 124) on only 21% of the area. In R-II, the shorter-duration varieties occupied 77% of the area and Pusa 44 merely 0.4%.

Farmers in R-I are probably attracted by the higher yield of long-duration varieties. Though the yields of PR 121, PR 124 and PR 126 are marginally lower than that of Pusa 44, the net income from shorter and longer-duration varieties is comparable. Paddy straw management of short-duration varieties is easier as they produce lesser biomass. By vacating the field earlier they also widen the window between paddy harvesting and wheat sowing. Further, farmers cultivating long-duration varieties are also incurring additional expenditure on deepening and installing submersible pumps. With the farmers not having to pay for electricity, the state bears the huge expenses. Above all, the underground water reservoir is being depleted which cannot be easily replenished.

The average yield of wheat, parmal paddy and basmati is higher by 893, 406 and 451 kg per hectare, respectively, in R-I than in R-II. Thus, evidently, the net income is also higher in R-I. The annual returns are higher by more than Rs 20,000 per hectare in R-I than in R-II. One may be tempted to attribute the higher yield of parmal in R-I to long-duration varieties. The average yield of wheat and basmati is also higher in R-I, although there is no appreciable difference in the varietal pattern in both regions. So, the higher yield must be due to favourable agro-climatic conditions in R-I. Therefore, by adopting short-duration varieties, the returns will continue to be higher in R-I than those in R-II.

The conservation of underground water resources is more badly needed in R-I than in R-II. Thus, there is an urgent need that the farmers in R-I should not only cultivate shorter-duration varieties but also transplant parmal after the notified date. We, the people of Punjab, particularly the opinion-makers, must realise that there is a need to resort to each and every practice of water conservation as this region is dangerously placed. For this, campaigns should be continuously organised for greater awareness; otherwise, we are inviting desertification.

It is the duty of all to conserve the rich, inherited natural resource base. It is an investment for the survival of the farming system not only for the future generations but also for the present generation. With the present practices of groundwater extraction, the available groundwater resources of Punjab may exhaust in 20 to 25 years. Let us join hands to meet the challenge of conserving water resources by their judicious use.