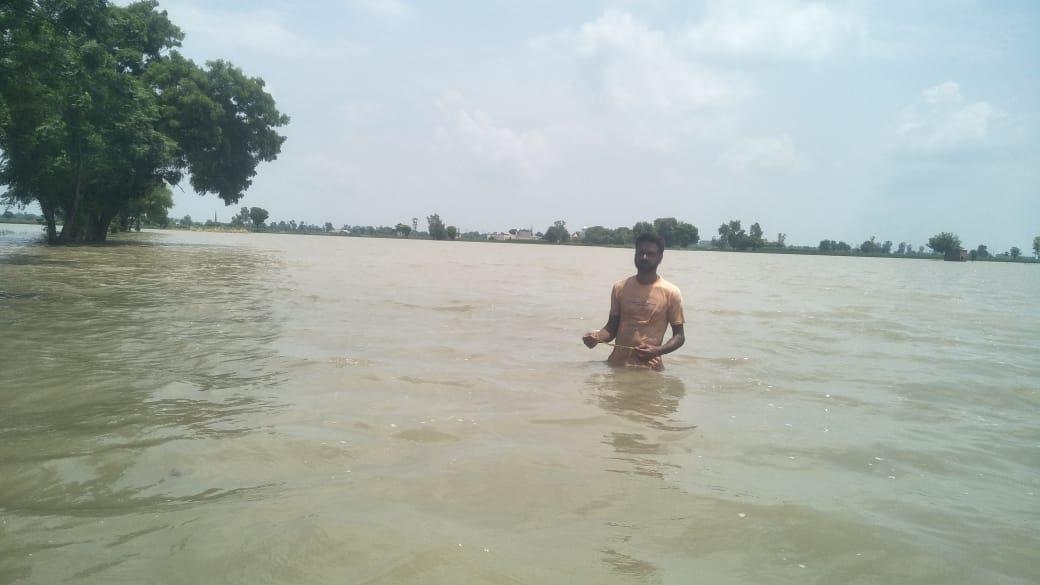 A farmer in his flooded field at a village in Sangrur district. Tribune photo

Hundreds of acres of paddy crop have been under rainwater for the past three days with the authorities failing to make drainage arrangements. Farmers fear the water will damage their crops and they will again suffer huge losses.

They still have not received any financial aid from the Punjab Government for the losses suffered last year after rainwater inundated their crops.

“Around 200 acres of the standing paddy crop at Bhutal Khurd, Dhindsa and other surrounding villages have been under water for the past three days. So far, no one from the government has come forward to offer help. We are trying our best to remove water, but that is a difficult task. The crop is likely to be completely damaged,” said Ram Singh from Dhindsa village.

Similarly in many other villages, including Chotiyan, Bhutal Kalan, Jaloor, Dudiyan, Bhundan Bhaini and Phulad, the crops have been inundated. Farmers alleged that repeated requests to the authorities for help had fallen on deaf ears.

“What can the officials do now as after remaining under water for three days, crops would not survive. Many farmers have already started preparations for resowing paddy, while officials are still making baseless claims to save damaged crops,” said Kultar Singh, another farmer from the area.

“There are many farmers who have not received aid for the losses suffered last year, while this year also the rain has damaged their crops,” said Rinku Moonak, BKU Ugrahan president of the Moonak block.

Lehra SDM Navreet Sekhon did not respond to calls.

“The administration is working to help affected farmers of around 10 villages. I am also visiting various villages. We also got cleaned the Ghaggar cleaned and strengthened its embankments this year to prevent any problem,” said Lehra MLA Barinder Kumar Goya.