Get gangster’s custody for 7 days 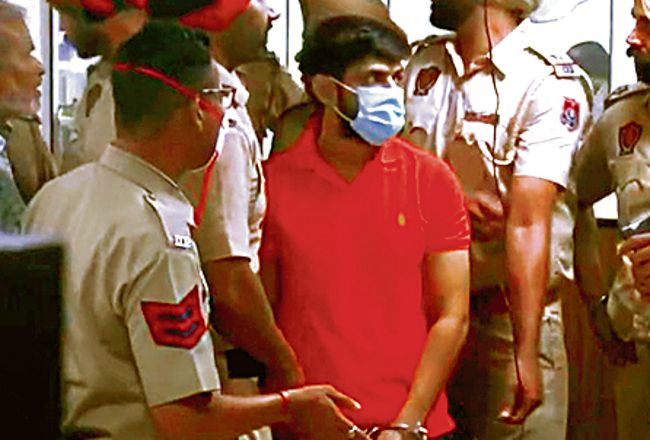 Members of the Anti-Gangster Task Force and a five-member Special Task Force (STF), probing the Sidhu Moosewala murder case, grilled gangster Lawrence Bishnoi throughout the day in Kharar on Wednesday to unravel the conspiracy behind the killing.

Members of the Anti-Gangster Task Force and a five-member Special Task Force (STF), probing the Sidhu Moosewala murder case, grilled gangster Lawrence Bishnoi throughout the day in Kharar on Wednesday to unravel the conspiracy behind the killing.

After he was brought from Delhi, Bishnoi was produced before a court in Mansa, which remanded him in seven-day police custody. Police sources said main focus of questioning was to seek Bishnoi's confession and to identify the shooters. They said the investigators quizzed Bishnoi to know if the crime was the result of a gang war, extortion or political conspiracy.

He was brought from Mansa to the CIA Staff Office in Kharar amid heavy security. The journey witnessed tense moments as the bulletproof vehicle in which Bishnoi was being brought had to be changed. The sources said this was done after a TV channel reporter mentioned the vehicle’s number in his report. A senior police official said, “The investigation is moving at a fast pace. We are working to join the dots as early as possible.” The sources said the police took three other gangsters arrested in the case to an undisclosed location near Haryana border to look for hidden weapons.

In his statement to the Delhi Police earlier, Bishnoi claimed he was not involved in the crime, but his gang members led by Canada-based Goldy Brar could have been involved. Bishnoi was presented before Judicial Magistrate First Class in Mansa at 4.40 am after his medical check-up at the Civil Hospital. Security in Mansa was beefed up, with the police carrying out a flag march last night. The police also got the remand of Naseeb, Monu Dagar and Pawan Bishnoi for seven days. Meanwhile, the police brought gangster Gurbir Gora, who was lodged in Hoshiarpur jail, on production warrant to Mohali for questioning by the Anti-Gangster Task Force. He is brother-in-law of Goldy Brar.

The sources said he was being cross-examined to verify Bishnoi’s claims.