As the Punjab Police arrested the sixth and last shooter identified as Deepak Mundi in the Sidhu Moosewala murder case along with his two aides from the Indo-Nepal Border in West Bengal when the trio were attempting to escape to Nepal, the entire conspiracy and modus operandi as also the link-ups of these gangsters was revealed. The operation was carried out jointly by the Punjab Police’s Anti-Gangster Task Force (AGTF) along with Delhi Police and Central agencies. 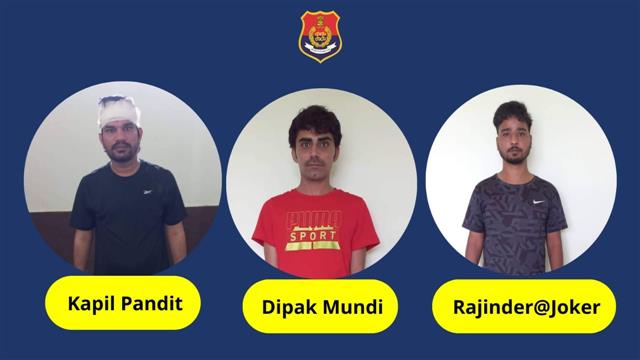 The preliminary interrogation of Kapil Pandit has revealed that he jumped parole in 2021 that he had got to attend the last rites of his mother, and was absconding since then for the murder of a person from his native village Bewad in District Churu, Rajasthan.

“It was then that he was approached by Lawrence Bishnoi gang through Sampat Nehra and Goldy Brar to carry out the killing of the Bollywood actor Salman Khan,” said DGP Gaurav Yadav, adding that Kapil along with Sachin Bishnoi and Santosh Yadav was asked to carry out the recce to plan the strategy to kill Salman Khan.

Kapil revealed that, earlier also, he had carried out recce for several times with intention to kill Sidhu Moosewala on the behest of Lawrence Bishnoi gang to avenge the killing of Vicky Middukhera, he added.

The DGP said that concerted efforts are being made to arrest the gangsters who had escaped overseas. As a result, gangster Sachin Thapan has been detained in Azerbaijan, and soon he will be extradited to India. The Police has submitted a challan against 24 accused in this case, he added.

DGP Gaurav Yadav said after killing Sidhu Moosewala, both Mundi and Kapil have been staying together and were constantly shifting their locations on the directions of Canada-based gangster Goldy Brar, who is the main conspirator. “Mundi and Kapil stayed in states including Haryana, Rajasthan, Gujarat, UP and West Bengal,” he said, adding that Joker, who was already stationed in Nepal, had come to West Bengal to facilitate the entry of Mundi and Kapil to take them to safe house in Nepal.

He informed that Goldy Brar had promised Mundi and Kapil to settle them in Dubai on fake passports. “Both were supposed to receive their fake passports in Nepal or Thailand, and after which they were to fly to Dubai,” he added.